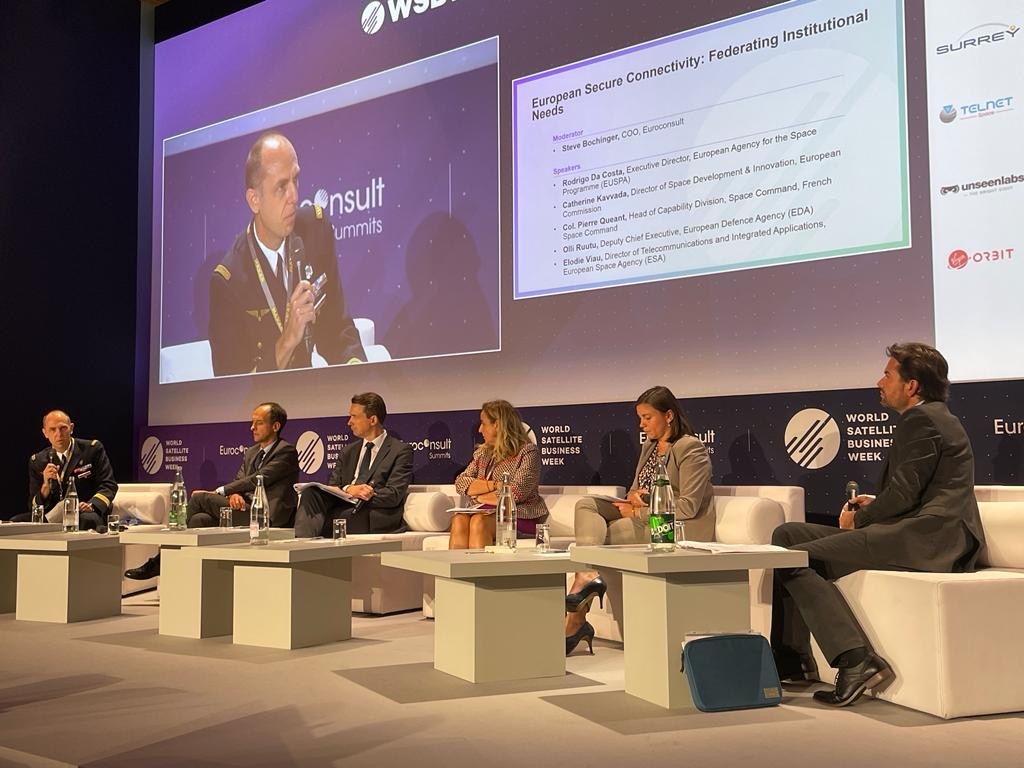 PARIS —  “Cyber has arrived in space and here is stay. What happened in Ukraine with Viasat, means it is here to stay. We need to look at new approaches for legacy assets, and this is not an easy job,” said Ruy Pinto, SES CTO, delivering a stark cyber warning last week at World Satellite Business Week in Paris.

The war in Ukraine was a shadow that hung over cybersecurity discussions at WSBW, as the war has really elevated the importance of cybersecurity for satellites. Catherine Kavvada, director of Space Development and Innovation for the European Commission, said while the notion of secure connectivity predates the war in Ukraine, it accelerated the idea of a common strategic approach to cybersecurity in Europe.

Kavvada spoke about how the EU is looking to develop a more all-encompassing approach toward secure connectivity. “We would like to go ahead with a new infrastructure to provide government services. We are looking also to help the private sector of the European Union to build the best commercial infrastructure,” she said. “We will not be the first system in the world, but we have the ambition to be the best. We need to have technological differentiators.”

Olli Ruutu, deputy chief executive of the European Defence Agency (EDA) said the EDA’s key task is to support defense capabilities. He said, “Secure satellite communications is highlighted in our capability plan. We have developed a broad satellite expertise. Satcom is just one element in space based information. It is based on the growing importance of space as an element to work for defence in this area. We have established a dedicated in space forum. We want to increase the coherence of capabilities in defence.”

Ruutu added that defense in space is increasingly seen as an important area. He believes Europe needs to take security and resilience more into account, and that space is identified as a space of operation. “There are opportunities for member states. We need to act at the speed of relevance. We need increased coverage. There is an ever increasing appetite for data,” he said. “There is a secure communication requirement that is very broad. With increased resources, we have the opportunity to make good decisions to help Europe for years to come. The foundations need to be put in place.”

“We are now in a period of war. One year ago, we had developed a vision where we had this feeling there will be high intensity warfare. We felt it was coming. We validated the fact that we entered a new type of warfare – so multi-domain – air, land, sea, cyber, space. We have the confirmation that we need secure connectivity. We need more bandwidth, low latency. We need to make sure we can take action instantly. We will have short windows of opportunity to operate,” he said.

Elodie Viau, director of Telecommunication and Integrated Applications for the European Space Agency (ESA), like others, said the crisis in Ukraine has revealed the importance of secure and safe connectivity. ESA has ambitious plans for secure connectivity and at this moment of crisis, Europe needs investment. “We need to protect our autonomy. The crisis is accelerating the investment into space,” she said.

Viau said ESA is working hand in hand with industry players to make sure the EU constellation is a success for Europe. “Space needs to integrate into the terrestrial network. We will ensure that major players will have a strong impact on this system. We will allow new entrants and non-space players to play a role in this. We are there to do validation at the system level, to ensure the system is delivered on time. We are transforming ourselves to go faster,” she said.

Walter Ballheimer, CEO of Reflex Aerospace, brought the commercial perspective that the most urgent need is to establish a backbone in Low-Earth Orbit (LEO) for secure connectivity. He added, “Secure connectivity is not just in space. We need to think about this whole program should be procured. A future constellation should be multi-orbit. We need the government and institutions to say they will use commercial services. The biggest priority is doing our homework and implementing the right kind of solution.”

Pinto of SES said for secure connectivity, SES sees a blended approach as the way forward. “We should look at the real requirements. We need to create the infrastructure from those requirements. The commission is looking for innovation. There are use cases are best served by GEO [Geostationary] assets, some by MEO [Medium-Earth Orbit] assets. There are others where maybe LEO could be the best,” he said.