Via Satellite Russia: The Top Quotes 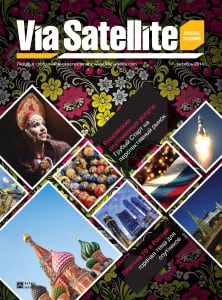 Click to read Via Satellite Russia in both English and Russian

[Via Satellite 09-26-2014] Few countries have as much history in satellite as Russia. As the country that sparked a global technology revolution and one of the today’s well-known and promising BRIC nations, Russia is a stalwart of the satellite industry but, as a market, it has seen challenges. In our regional edition, Via Satellite Russia, we cover the ups and downs of satellite services throughout the country while also taking a look at what the future has in store.

From the tumultuous tale of satellite broadband to the prospects for pay-TV and Ultra HD, here we bring you a sample of the top quotes from Via Satellite Russia:

“It was amazing! A very small antenna about 70 cm in diameter, easy to assemble, a single wire in the home, easy satellite tracking, then you simply use the built-in beeper to switch the terminal on. It was the perfect product for the mass market,” – Vitaly Vashkevich, CEO, KA-Internet

“Soon, the people, authorities and business entities of Siberia and the Far East will be able to appreciate the quality performance of Russian VSAT operators via the Express-AM5 asset.” – Evgeny Buidinov, deputy CEO for innovative development, RSCC

“The market is not that great yet, but it’s ripening. Satellite technology will play a major part in the government’s drive to eliminate digital inequality.” – Yulia Babkina, head of end-user service directorate, Gazprom Space Systems.

“Meanwhile — unless and until such a player turns up — the market is between 50,000 and 80,000 users with an ARPU of 2,000 rubles ($55) per month. If someone could jump-start the market, the user audience could swell by a factor of a few dozen.” – Denis Dianov, CEO, Raduga-Internet

“Right now, we are limited in every single step of the technological chain. It starts with the production chain, which is right now significantly expensive. It is also very expensive in terms of capacity. Right now, the costs of transmitting one 4K channel using the best profile, you will utilize 50 Mbps for almost one channel. So, that is almost one transponder dedicated to 4K. But, with the new techniques of compression, 4K will start being available to customers.” – Oleg Kolesnikov, technical director, NTV+

“The main trend of the Russian pay-TV market is its growth. According to the company J’son & Partners Consulting in 2018, the overall subscriber base in pay-TV will be 40.9 million households, which is 17 percent higher than the figure in 2013. Penetration of pay-TV services by 2018 will reach 75 percent, while the average growth rate of the market in period 2014-2018 will be 3 percent.” – Sergey Rozov, director of satellite TV, Orion Express

“Satellite TV is very popular in Russia, especially in small country towns. In some regions, particularly in the south of Russia, satellite TV holds more than 70 percent of the total number of pay-TV subscribers … This is due to the fact that Russia, with its vastness, rugged topography and climate, is a hard place to create cost-effective cable infrastructure.” – Igor Kotsarev, technical director, at Tricolor TV

“We are looking to the fullest new distribution technologies, such as mobile TV, OTT, multiscreen, and TV Everywhere, while continuing to grow our presence in the traditional television broadcasting markets around the world. The main trend is the gradual replacement of linear broadcast with non-linear. Development of various VOD services that can deliver diverse, catalogued content, including HD video, will define the evolution of video landscape in Russia.” – Alexey Nikolov, managing director, Russia Today