Russian President Vladimir Putin has long been a vocal advocate for the construction of the Vostochny Cosmodrome, a new spaceport in the Russian Far East that he hoped would reduce the country’s dependency on the Baikonur Cosmodrome in Kazakhstan. Unfortunately, the first two launches from Vostochny have been abject failures, including this week’s failed mission to orbit a new weather satellite over Russia. In this article from 2005, Via Satellite presents an overview of the country’s first steps into the commercial satellite industry, and the rocky road that has led to this moment. This story was originally published in the November 2005 issue of Via Satellite. 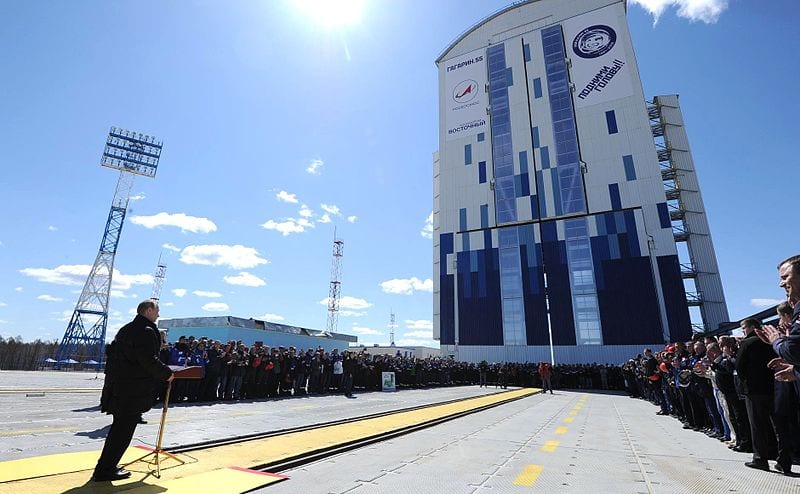 Vladimir Putin, President of the Russian Federation, gives a speech at the launch of the Soyuz-2.1a from Vostochny on April 28, 2016. Visible is also Yuri Gagarin’s face and slogan “Raise your head!” to commemorate the 55th anniversary of Gagarin’s flight. Photo: Wikimedia Commons.

While improving, Russia’s use of satellite services remains well below that of North America and Europe. Even today, thousands of Russian towns and villages lack basic voice telephone service. Still, the times are changing in Russia, as a growing grasp of market economics, pragmatic government rule and gradual liberalization of the telecommunications sector is making it easier for satellite services to take hold. “There’s a lot of activity going on in Russia these days,” says Chris Leber, ViaSat Inc.’s vice president and general manager of VSAT networks. “We’re seeing strong demand for our Linkstar DVB/RCS-based technology as well as our full mesh broadband Linkway product. Most of the demand is coming from the banking and oil and gas sectors.”

“All of the new satellite applications are converging onto the IP platform,” adds David Owers, Polarsat’s director of key accounts. “Whether it’s voice, data, Internet access and even videoconferencing, Russian satellite users are increasingly doing it on IP.”

The advantages of satellites for bridging large distances has not been lost on the Russian oil and gas sector. This is why companies such as Lukoil – Russia’s largest oil and gas firm – have adopted satellite communications to link remote gas exploration sites with the company’s headquarters. Polarsat has established a 50-site private network for the oil giant using Polarsat’s VSATPlus 2 equipment, says Owers. ViaSat has provided ground station equipment, VSAT terminals and satellite services for Lukoil, Leber says.

Other businesses are gradually making their way onto satellite, as diverse enterprises see satellite’s advantages for providing far-flung voice and data communications. Many Russian companies buy their services from RSCC, which buys much of its equipment from Western companies such as Advantech AMT. The Montreal-based manufacturer of microwave communication products, provided a pair of its remotely controlled antenna steering retrofits to RSCC, says Vagan Shakhgildian, Advantech’s president. The retrofits were installed in RSCC gateways in Dubna, outside Moscow, and Siberia. Advantech also provided ground station equipment to Russia’s Central Bank, Rostelecom and Transtelecom, he adds.

With such vast land masses to cover and plenty of water and ports, it is not surprising that Russia has a large marine fleet, and thus, a real need for maritime satellite voice and data services. Inmarsat and its distributors are beginning to capitalize more on that market. “It’s not just the country’s ocean-going ships and trawlers that use Inmarsat,” says Anders Kallerud, Telenor’s vice president of sales. “Russia’s inland waterways are also heavily used for shipping goods, and those ships rely on Inmarsat as well.”

Keeping these ships connected via satellite is the job of MVS Moscow, part of the FCC-licensed Inmarsat distributor MVS USA, which sells Telenor Inmarsat equipment. MVS USA President Deborah Deffaa says Inmarsat services also are finding other niches in Russia due to Inmarsat’s higher-speed Regional Broadband Global Area Network (R-BGAN) offering, which can send and receive data at speeds up to 144 kilobits per second.

“We are seeing a lot of uptake among the oil and gas, government, and mobile user sectors,” Deffaa says. “We’re also providing R-BGAN connectivity for two Washington Post journalists. Reporter Lisa Dickey and Post Photographer David Hillegas are traveling around Russia filing material for http://www.washingtonpost.com, and we are responsible for getting their material back to America via Inmarsat.”

MVS’s success in marketing higher-speed satellite services indicates the growing interest in Russia for Internet access. In a country where “only 10 percent of 150 million inhabitants have Internet access, there is real interest in satellite broadband,” says Arunas Slekys, Hughes Network Systems (HNS) vice president and general manager for Russia and Newly Independent States. But the state of the Russian economy is limiting the market for broadband satellite services, he adds.

“Those companies who are accessing satellite broadband through our Russian-based Direcway VSAT hubs are typically at locations of 50 or more people,” Slekys says. “Such is the cost and the state of the Russian economy that satellite broadband sales to small businesses and consumers has yet to take hold. It’s very much a nascent market, and we’ll need to bring costs down to hit the right price point for these customers.”

Distance education via satellite also has captured the Russian imagination. Siberia’s Tomsk State University (TSU) is using HNS’ Direcway network and DW6000 terminals to provide distance learning to the Tomsk region, providing remote villages and schools with a level of education previously not possible in the region. “We understand well that online technology is the only means of providing the quality of education comparable to a traditional classroom,” TSU prorector Vladimir Demkin said in an article in HNS’ Channels magazine (Summer 2005). “Unfortunately, existing terrestrial lines cannot provide the quality of communications needed for online distance learning. That is why we decided to implement the Direcway satellite service.”

Despite this progress, Russia remains a tough place to sell satellite services, says David Hartshorn, secretary general of the Global VSAT Forum (GVF). “In all of the world during the past eight years of the GVF’s existence, there is one country where we have worked harder than anywhere else to liberalize regulations and seen less improvement in local conditions, and that is Russia.” Three years ago, things were even worse, with “less than 5,000 operating ground stations in Russia,” he says. The growth of the market was hindered by the Russian government’s onerous regulations. “We calculated that it cost up to $10,000 per terminal to cover various licensing fees – one required for each terminal – and took many months for the licenses to be processed by the Russian bureaucracy,” he says.

Since then, Russia has substantially streamlined its licensing procedures, reducing both costs and processing times, says Owers. “If your earth station has a small antenna and a low EIRP [effective isotropic radiated power], you can apply for your certificate under the simplified procedure.”

This said, the liberalization of Russia’s earth station laws comes with a Kremlinesque catch: You have to use Russian satellite bandwidth, usually marketed by RSCC, in order to qualify for relaxed regulation. RSCC has spent $780 million to launch five Express-AM satellites to upgrade its technology and strengthen its position in the domestic market, Yuriy Izmaylov, the company’s director general, says. This has increased RSCC’s in-orbit capacity from 89 transponders in 2001 to 273 in 2005. Despite the improvements that RSCC has invested in, the Global VSAT Forum would still like the Russian-provided satellite bandwidth requirement to be waived, Hartshorn said.

“We’re encouraging the Russian government to consider broadening its rules, so that their end users can take advantage of competitively-priced services from non-Russian carriers,” Hartshorn says. The Global VSAT Forum has raised this issue with the U.S. Trade Representative, who has put the subject on the agency’s World Trade Organization agenda, he says. The Forum also plans to hold a high-level summit with the Russian government in Moscow, in conjunction with the National Assembly of Satellite Communications [Russia’s satellite industry association] and the European Satellite Operators Association, to further pursue the issue of relaxing Russia’s licensing rules,

Along with its restrictions on VSAT licensing, Russia also remains a tough place to import and export satellite equipment. “We’ve tried to export Russian antennas to customers in other parts of the world,” says Advantech’s Shakhgildian. “We have succeeded, but only after the vendor spent many months trying to get export permission from the Russian government.”

Sales resistance among Russian businesspeople, an entrenched post-Soviet bureaucracy and a lingering distrust of foreign intentions are the main inhibitors to doing business in Russia on a good day in Russia. But when privately-owned companies such as Yukos oil group are legalistically attacked by the Russian government – resulting in the incarceration of Yukos CEO Mikhail Khodorkovsky and “the effective re-nationalization of the core assets of Yukos oil group,” according to the Financial Times newspaper – it is enough to make the most daring of investors think twice before dealing with Russian companies.

But international investors are not staying away, says Slekys. “People had predicted doom and gloom for Russian investment in the wake of this whole business with Yukos,” he says. “But that’s not the case. There’s enough strength in the Russian economy even without a booming oil and gas sector to make it worthwhile. Take telecom. It is growing at a healthy double-digit rate, and if the government proceeds with its e-Russia initiative, telecom overall and satellite services in particular will continue to grow substantially in years to come.” According to the Moscow Times, e-Russia is “a much-hyped, 76 billion ruble ($2.5 billion) program to boost the country’s use of information technology.” E-Russia projects include putting tax forms online, installing computers in schools and developing better legislation for the IT sector.

One risk-reducing tactic for investors interested in the Russian market is to find local partners who know the business landscape and who do not have a history of conflict with the current regime. “It is extremely important to have local representation in Russia,” says Chris Alfenito, Miteq’s director of sales for satellite communications products. “Not only are they using the same language as potential customers and working in the same time zones, but local partners understand subtle cultural nuances that” international companies may not.

Despite the many impediments to business, Russia is a natural market for satellite services. And despite President Vladimir Putin’s nostalgia for the glory days of communist rules – in April he called the demise of the Soviet Union “the greatest geopolitical catastrophe of the century” – there is no doubt that this pragmatic KGB alumnus is committed to advancing prosperity in current-day Russia. After all, Putin recognizes that a modern, thriving country is a strong country and that satellites can play a pivotal role in bringing all of Russia firmly into the 21st century.

James Careless is senior contributing writer to Via Satellite Magazine.