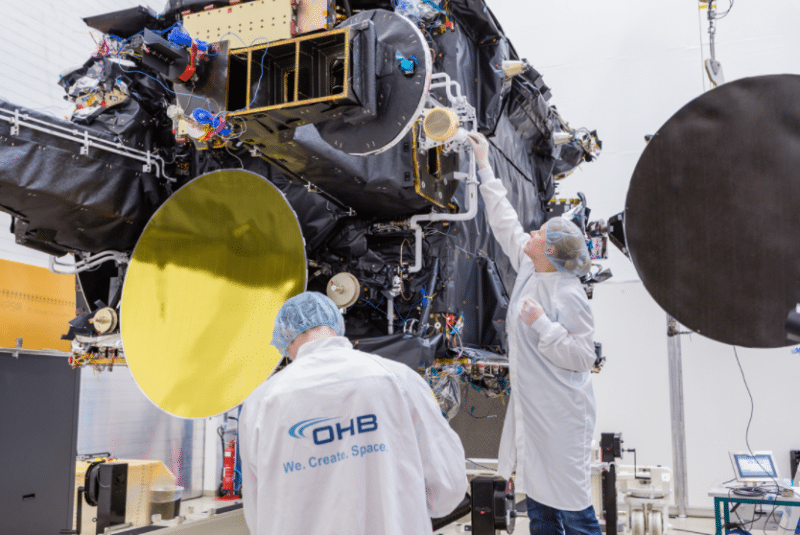 The Hispasat 36W 1 satellite is now located at its final orbital position at 36 degrees west, and over the next few days will begin to offer its telecommunications services after having successfully completed in-orbit testing. This new satellite offers coverage over South America and Europe, including the Canary Islands, and has 20 Ku-band transponders as well as additional Ka-band capacity.

According to Hispasat, 36W 1 has a 15-year lifespan and will offer video contribution and cellular backhaul services, as well as business and broadband solutions, among other appications. German manufacturer OHB System AG built the satellite, and this is the first mission of the new SmallGEO platform developed by the company together with the European Space Agency (ESA) and Hispasat. According to OHB System AG, this platform allows a substantial reduction in satellite mass due to the use of electric propulsion throughout the lifespan of the satellite.

Hispasat 36W 1 incorporates RedSat, a regenerative payload consisting of a novel active antenna with reconfigurable beams that, together with the on-board processor, improves the efficiency and performance offered by the satellite, according to the company. The antenna can be electronically controlled from the Earth and reoriented at any point during the lifespan of the satellite, granting it the flexibility to adapt its coverage to orbit changes that may occur in the mission after launch.

Hispasat stated the on-board processor can simplify network architecture by performing in space a part of the processing usually carried out on Earth. It will be able to simultaneously process up to four 36 MHz transponders, correcting any degradations of the signal and transmitting it without errors, leading to a more robust and higher quality communications system that enables signal reception with small-diameter antennas.

Hispasat 36W 1 lifted off from the European Space Port of Kourou in French Guiana on January 27 aboard a Soyuz rocket from Arianespace. Since then, the subsystems, transponders and antennas have been rigorously tested to ensure they operate correctly in orbit.