Canada on Path to Provide High Speed Internet to All 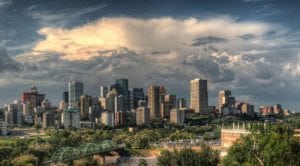 [Via Satellite 01-18-2017] On Dec. 21, the Canadian Radio-television and Telecommunications Commission (CRTC) declared that broadband access internet service is now a “basic telecommunications service for all Canadians,” vowing to bring high-speed internet access to all citizens. With the government setting its sights on speeds of 50 megabits per second (Mbps) downloads and 10 Mbps upload for fixed broadband internet access services, the CRTC will now look to expand internet infrastructure throughout the country through $750 million in funding that will come available in the next five years for areas that do not meet the targets. But what piece of that pie belongs to the satellite industry?

As a large country with far-reaching remote regions, the government is looking to all players in the communication landscape to do their part to ensure Canadians have access to “the services they need to participate in the digital economy,” Jean-Pierre Blais, chairman and CEO of the CRTC, said in a statement released along with the December announcement.

“Access to broadband Internet service is vital and a basic telecommunication service all Canadians are entitled to receive. Canadians who participated during our process told us that no matter where they live or work in our vast country — whether in a small town in northern Yukon, a rural area of eastern Quebec or in downtown Calgary — everyone needs access to high-quality fixed Internet and mobile services. We are doing our part to bring broadband services to rural and remote communities,” said Blais.

Currently, according to the “2014 CRTC Satellite Inquiry Report,” about 90 communities in rural areas of the country rely on satellite for telecommunications services provided through two models: Direct-to-Home (DTH), and the community aggregator model, which uses a local access distribution network that connects end users to an earth station using satellite transport that can support both voice and data services. This amounts to more than 18,000 households that rely on satellite services throughout the country.

“Many Canadians who depend on satellite services for some or all of their telecommunications needs are located in some of the nation’s most remote areas, where terrestrial transport facilities are minimal or non-existent. In particular, satellite-dependent communities present a challenge to connect terrestrially due to significant costs, lack of roads, harsh terrain, and short construction seasons,” Patricia Valladao of the CRTC told Via Satellite.

While many Canadians rely on satellite internet throughout the country in areas where it is prohibitively expensive to build out terrestrial broadband networks, only about 1.5 percent of households in Canada subscribe to satellite-based internet. This pertains mainly to areas in Northern Canada that rely on satellite as a sort of “last resort” technology, but these are not the only areas reliant on satellite tech.

“Lesser known is that many communities just outside major metropolitan cities also rely on satellite internet, places that are not quite urban, and not quite rural, but somewhere in between. For instance, the ISP Xplornet mentioned in the proceeding of this decision that their satellite customers are most concentrated right outside Toronto, Canada’s largest city,” said Cynthia Khoo, an internet and digital policy lawyer that advises several organizations on CRTC hearings.

The problem in expanding satellite alongside this decision, however, is that current satellite-based internet services do not meet the new standards that the CRTC decision set out, especially at affordable prices, according to Khoo. When it comes to actual service on the ground, as opposed to advertised service, many do not even meet the former targets of 5 Mbps downlink, 1 Mbps uplink speeds. She notes that the last federal government set previous speed targets at 3 Mbps for the rural communities in Nunavut and in Nunavik, Quebec, due to their reliance on satellite.

“The real challenge for satellite internet, though, is not necessarily speed in the sense of bandwidth, or throughput. Where satellite falls down compared to other forms of internet access is in other quality of service factors such as latency, or the time it takes for the user’s data packet to travel from their home device and back,” says Khoo, noting that this is a physical limitation due to satellites being so far away and the data having that much more distance to travel. Weather susceptibility is another common barrier. “All things considered, satellite companies will have to come up with some really advanced and innovative solutions if they are to contribute meaningfully to advancing Canada’s national broadband plan,” said Khoo.

Going forward, the CRTC has dedicated up to 10 percent of each year’s total funding limit to supporting operational and some capital costs of internet service in satellite-dependent communities. According to Khoo, this means that satellite-based internet service providers are eligible for funding related to improving speed, capacity and quality of internet access, including the costs of satellite capacity and equipment, satellite links, modems and other costs related to building and maintaining earth stations.

Khoo is careful to note that this funding is not for satellite per se, but that it is for the communities. If satellite can prove to be the most affordable option to provide the appropriate standards of internet access, then they would remain the champion service in these areas, otherwise, it may mean taking the communities off satellite.

“I think everyone who cares about this issue would love to see satellites surprise us,” said Khoo.

With affordable high-speed internet as the key to enabling meaningful participation in today’s society, providing access to banking, research, school or work, among other opportunities, satellites participation could be important to the marketplace in more way than one. The competition that a low-priced satellite service could bring could prove to be valuable to the market at large.

“Canadians will not see high-quality, affordable Internet access until there is significantly more choice and competition in the market,” said Khoo. “Right now, approximately 90 percent of the internet service market is concentrated in the hands of the top few providers. Changing this requires opening up fiber broadband networks to competitors and independent Internet service providers, and creating a regulatory environment that allow new start-up providers to flourish, whether in wireline or wireless services.”