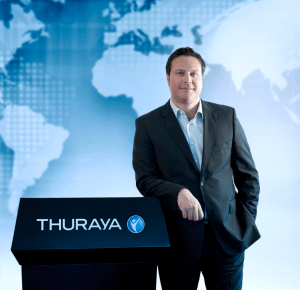 [Via Satellite 09-09-2016] Thuraya Telecommunications Company has finalized its next generation constellation plans to extend its geographical reach, move into new market sectors and launch new services and devices. The company announced its L-band network will undergo extensive evolution. While continuity is assured with both existing satellites Thuraya 2 and Thuraya 3 continuing to operate as planned, the current satellite footprint will be enhanced significantly with the planned launch of next generation satellites from 2020.

The next generation system will focus on delivering high mobility services in core and new markets. These will be complemented with High Throughput Satellite (HTS) services for bandwidth-hungry applications in land, maritime and aeronautical markets. The constellation will be supported by highly advanced platforms for the provision of “new wave” Internet of Things (IoT) and content services, with multicasting and broadcasting capabilities. This will enable Thuraya to address new growth markets requiring the mobility, capability and coverage available through L-band or HTS services, or in many instances through a combination of both, according to the company.

Having prepared and finalized its next generation plans with global management consultancy A.T. Kearney, Thuraya is now in the process of appointing a financial adviser to begin its fundraising activities. Discussions are already in progress with a number of potential strategic investors, according to Thuraya.