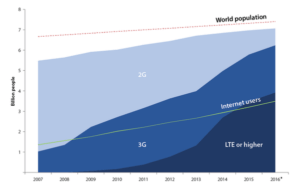 [Via Satellite 07-22-2016] An estimated 3.9 billion people — more than half of the global population, remain cut off from Information and Communication Technology (ICT), according to the International Telecommunications Union’s (ITU) “ICT Facts & Figures 2016” report.

The study finds developing countries now account for the vast majority of internet users, with 2.5 billion users compared with 1 billion in developed countries.

Internet penetration, however, stands at 81 percent in developed countries, compared with 40 percent in developing countries and 15 percent in the Least Developed Countries (LDC). Furthermore, despite falling prices for ICT services, the study finds mobile broadband growth is slowing.

While almost one billion households in the world now have Internet access (of which 230 million are in China, 60 million in India and 20 million in the world’s 48 LDCs), figures for household access reveal the extent of the digital divide, with 84 percent of households connected in Europe, compared with 15.4 percent in the African region.

Internet penetration rates are also higher for men than for women in all regions of the world. The global internet user gender gap grew from 11 percent in 2013 to 12 percent in 2016. The regional gender gap is largest in Africa, at 23 percent, and smallest in the Americas, at 2 percent.