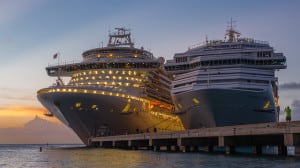 [Via Satellite 03-11-2015] Based on findings from tracking on customer performance on its hybrid broadband network, new Internet billing method and Internet café solution, MTN Communications found the average Megabyte (Mb) consumption rate of cruise ship operators increased by more than 500 percent. Other findings included an increase in users of more than 40 percent, and an increase from operators in Internet revenue in excess of 35 percent.

MTN found that crew bandwidth use increased by roughly 50 percent in Mb per user, along with a more than 35 percent increase in user rate, resulting in an increase in revenue above 30 percent. The company also noted a dramatic shift away from desktops and laptops, which accounted for 94 percent of devices using Internet onboard in 2010. By 2014, mobile phones constituted 60 percent of devices, with the remaining 40 percent split equally between tablets and desktops or laptops.

MTN’s research also looked at consumer habits from its Terrestrial Broadband Network (TBN), which can switch seamlessly with satellite depending on which option is optimal. The company found the average in-port capacity is typically more than five times that of a vessel with 10 Mbps of satellite capacity, and almost seven times that of a ship with 7 Mbps of satellite capacity. During an average port visit vessels consume 175 to 200 GB of data.