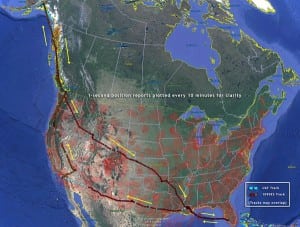 [Via Satellite 09-19-2014] Globalstar, in collaboration with ADS-B Technologies, recently completed a four-day 7,000-mile flight test of a dual-link Automatic Dependent Surveillance-Broadcast (ADS-B) system. The space-based ADS-B Link Augmentation System, or ALAS, is capable of tracking an aircraft’s location for every second of its trip.

The Globalstar and ADS-B Technologies test flight traveled from Anchorage, Alaska, to New Orleans, La., and across the Gulf of Mexico to Fort Meyers, Fla., before flying over the Rocky Mountains on a return-trip to Alaska. The aircraft stayed connected through Globalstar’s L-band payload and thoroughly evaluated both the 1090ES and UAT versions of the ALAS technology.

“[ADS-B Technologies] accomplished all of their stated goals,” Jay Monroe, chairman and CEO of Globalstar told Via Satellite. “The avionics they were using and testing were essentially flawless for more than 48 hours of actual test flying. It was very successful.”

According to Monroe, the latency of Globalstar’s space-based ADS-B is roughly equivalent to that of terrestrial systems, i.e. about half a second. With a constellation already being fielded, the cost of implementation is also lower, he said. Globalstar and ADS-B Technologies anticipate the constant second-to-second satellite tracking system will have strong opportunities in several markets.

“The first market and the largest market from the perspective of a revenue opportunity is commercial, followed by business and military aviation, and general aviation will follow on in a few years,” said Monroe, regarding the areas of aviation that could most effectively benefit from ADS-B. “[But the] commercial aviation market is the largest opportunity in terms of number of hours and flights per day.”

Monroe added there is also strong potential in emerging markets, where the high cost of terrestrial systems may prompt customers to jump straight to a less expensive space-based alternative. Globalstar owns satellite gateway stations in Europe and the Americas, and recently purchased three stations in Brazil. The company has been upgrading ground stations with its second-generation network, which can accommodate ADS-B services such as ALAS.

Monroe said Globalstar would be open to building new gateways, especially in emerging markets that are interested in ALAS. The airline would only be responsible for the cost of the hardware necessary onboard the aircraft. Globalstar would take the cost of building the new gateway, which at a cost of a few million, would not be material compared to the value of the additional revenue from the site, according to Monroe.

“We’ve already built the global satellite network that can provide space-based ADS-B, so there is little ground infrastructure cost that any country will have to take on,” explained Monroe. “Not to mention that Globalstar’s network sells voice and data in many different industries and doing ADS-B is just one use of that satellite network.”

Aircraft equipped with ADS-B/ALAS can fly in straighter paths, allowing for savings in time and fuel costs. Globalstar anticipates interim approval by the Federal Aviation Administration (FAA) next year, preceding final approval, which is only possible after the last piece of equipment is deliverable to aircraft. Once all the equipment is ready, the company expects the FAA to grant a Supplemental Type Certificate (STC), giving the right to install the equipment.

For Globalstar and ADS-B Solutions, the certification would be another major milestone following years of effort and thousands of flying miles.

“We’ve been working tirelessly on tracking solutions since the loss of Air France 447 in 2009 in hopes that one day, missing aircraft will be a thing of the past,” said Skip Nelson, president of ADS-B Technologies in a statement. “As our tracking map clearly demonstrates, we believe that day has finally arrived.”