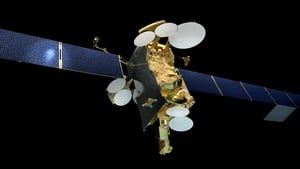 [Via Satellite 09-16-2014] SES is preparing future satellites to include a greater focus on mobility, especially regarding In-Flight Connectivity (IFC). Two upcoming SES spacecraft, SES 9 under construction by Boeing, and the High Throughput Satellite (HTS) SES 12 by Airbus Defence and Space, will have features enabling them to bolster service for aircraft traveling to and around Asia.

According to SES’ VP of Business Development in North America Steve Corda, the company has been working on incorporating aeronautical traffic modeling into satellite design for the past several months. SES now has a database containing details on nearly every scheduled flight that occurs on a regular basis. By using this information, the company can cut down on cycle time between a concept and an acceptable satellite design when focusing on serving the IFC market.

“As we go through and look at new HTS concepts and designs that we think are appropriate for this market, we can in real time put the traffic analysis in as well,” Corda told Via Satellite.

Set to launch in 2015, SES 9 supports sizeable mobility beams specialized for aircraft and ships. The larger satellite, SES 12, is a hybrid communications platform with advanced reconfiguration capabilities that can re-determine how much capacity is available in a given beam at a given time.

“IFC will have much more impact on satellite operators’ decisions in the future,” said Wei Li, senior consultant at Euroconsult. “When you looked at the satellite capacity used for in-flight connectivity today, most of the capacity is leftover from satellites designed for Direct-to-Home (DTH) TV broadcasting service or maritime services. This has been changing over the past 24 months.”

For SES, the two aforementioned satellites have been honed to reduce fragmentation, which occurs when aircraft move from one spot beam to another, changing the requirements on each beam. Corda said tracking and responding to aircraft locations is preferable to using a single wide-beam, because the signal quality would be insufficient. Instead, by planning processes and recognizing different flights while en route, SES can optimize the placement of the beams as well as the beam sizes to minimize the fragmentation that occurs when a plane switches from one beam to another, creating a much more efficient design. Even more granular data from modeling passenger use enables the company to determine how much throughput is needed both on average and during peak usage times.

“[SES can] translate that into how many megahertz [and] how much power TWT-wise, so it helps us with our frequency planning, it helps us with our power budgeting on the satellite, [and] it also helps us in optimizing the placement of the spot beams so that we will cover the flight routes and be able to essentially maximize the coverage opportunity of a particular aircraft,” said Corda.

The same modifications made to bolster connectivity for aircraft will also have overlapping benefits with maritime users, according to Corda. SES 9, in particular, is designed with spot beams specifically for the maritime market. The higher standards needed for aircraft yield improvements for sea-faring vessels too.

As IFC becomes a stronger market, Euroconsult anticipates it will have an increasingly prominent focus for future satellites.

“Connectivity providers now have the financial resource to allow them to commit to large amounts of capacity before the satellites are launched,” said Li. “They expect the coverage and capacity to be tailored to their requirements and they are willing to pay for it. Looking at [Fixed Satellite Service] FSS satellite operators’ typical business model, they always try their best to sell about 85 percent of the capacity before the satellite is launched. It becomes a perfect fit.”

Corda said both In-Flight Entertainment (IFE) and mobility will influence more satellites in the future, adding that SES currently has “a number of different satellites on the drawing board” that cannot currently be discussed. Most high-traffic air routes are already within SES satellite footprints today. The next step is developing new capabilities and improving services as IFC becomes a bigger priority.