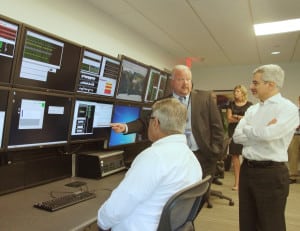 [Via Satellite 07-31-2014] SES has moved the operations for 23 satellites — roughly half the company’s fleet — to a new Satellite Operations Center (SOC) in Princeton, N.J. Satellite controllers are tending to the satellites, which provide broadband and television services around the world, on a 24/7 basis from the new site.

The other half of SES’ fleet of more than 50 satellites is managed from the company’s global headquarters in Luxembourg. Martin Halliwell, chief technology officer of SES, said the new SOC provides the company additional room to grow.

“Whether it’s electric propulsion satellites or an expanding fleet of more than 100 satellites, SES has the expertise and the advanced satellite control stations to deliver on the future,” he said.