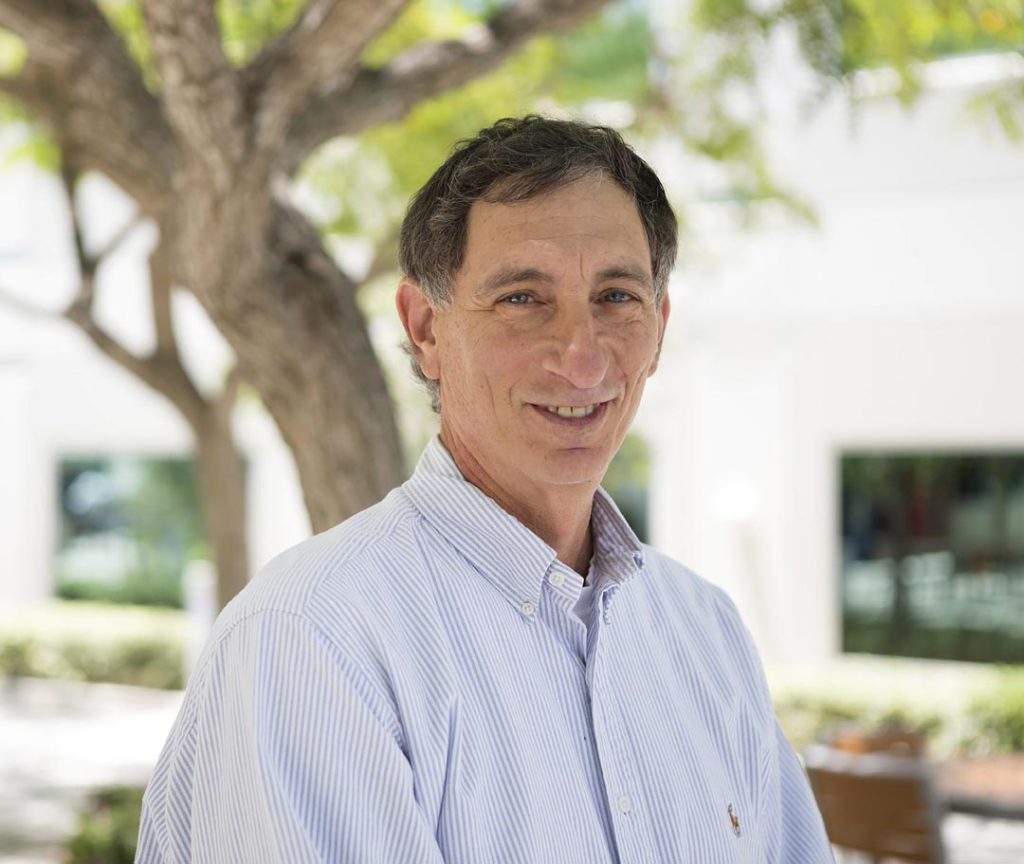 I wish I had started even earlier,” says Mark Dankberg, chairman, CEO and cofounder of ViaSat. Even though he started ViaSat at the youthful age of 31 with a good education, working under entrepreneurs such as Irwin Jacobs and Andy Viterbi who founded Qualcomm, he admits he would have liked to have made the move sooner. Certainly, the early days of ViaSat were a test, and one of the first big decisions was for the founders (Dankberg, Mark Miller and Steve Hart) to buy Macintosh computers. 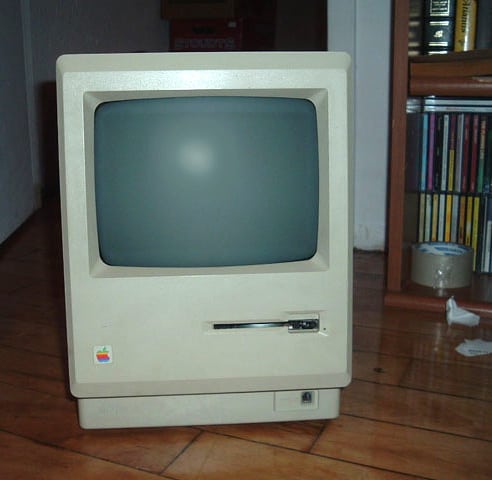 One of the first Macintosh computers from ViaSat’s early days. Photo courtesy of ViaSat.

“When we started the company, we each agreed to buy ourselves a Macintosh computer. We didn’t have a laser printer or a copy machine. In meetings, we would have to stop at Kinko’s and print out our presentation. You remember those types of things, and remember your progress and what you started from. We bought the 512 kbps version of the Macintosh, and you could buy a 5 MB hard drive. Actually, having our Macintosh and not using a corporate mainframe helped us do better proposals than a lot of the bigger companies were doing. This enabled us to differentiate ourselves,” Dankberg recalls. “When we started, it was a total bootstrap company. So, [we did] everything from buying parts, to soldering circuit boards, writing manuals, and writing technical proposals, etc. Doing everything together to grow the company in these early days really helped knit together a very close team.”

From those days in the late 1980s, the company made startling progress and is now known as one of the giants of the satellite sector. However, unlike some, it was not a given that Dankberg would end up in the satellite sector and, he admits, finding himself in satellite “was unexpected, almost an accident.”

In the 1970s, a young Dankberg graduated from Rice University, where he had taken a number of different courses trying to figure out what his next move was. However, the key consideration at this stage was moving back to Southern California to live and work. At that point, the opportunity to work at Rockwell Collins came along.

After having been at Rockwell Collins for two years, one of the decisive moments of Dankberg’s career took place when he made the move to Linkabit, led by Jacobs and Viterbi. This was the move that projected Dankberg further into the satellite sector. He stayed at Linkabit for seven years, which he describes as the most “impactful” in terms of shaping his career, with Jacobs and Viterbi becoming major influences.

“Irwin Jacobs wrote the book on digital communications theory, and Viterbi was a brilliant communications professor who invented Viterbi decoding. The other Linkabit founder was Leonard Kleinrock, who wrote the book on queueing systems theory, which is really fundamental to how networks work. Linkabit was very academically oriented. It had started as a little bootstrap start-up company. When I joined, it had around 200 people or so. It had a lot of success,” Dankberg says. “What I took away from it was that the quality of work that they did was really good. It was very theoretically well grounded. They attracted really good engineers; work was really interesting. I got to work on things on a theoretical basis, and then to build those things in the labs like satellite modems and networks. Irwin Jacobs, as an entrepreneur and businessman was a fabulous role model for me.”

It was in around the mid-1980s, when Dankberg was well established at Linkabit, that he would reach another key career inflection point. Jacobs and Viterbi and seven other Linkabit employees left to form Qualcomm. One option was to join Qualcomm as an early employee. However, the time was now right for Dankberg to start-up ViaSat. Summing up his thoughts at the time, he says, “I worked really closely with Steve Hart and Mark Miller; we liked working together and we had a good reputation in the defense sector. So, I spoke to venture capitalists and read a lot about starting companies. It was a good time, I thought why not try it? If it didn’t work, I thought I could have a place at Qualcomm. But it seemed a good opportunity to try starting a company. 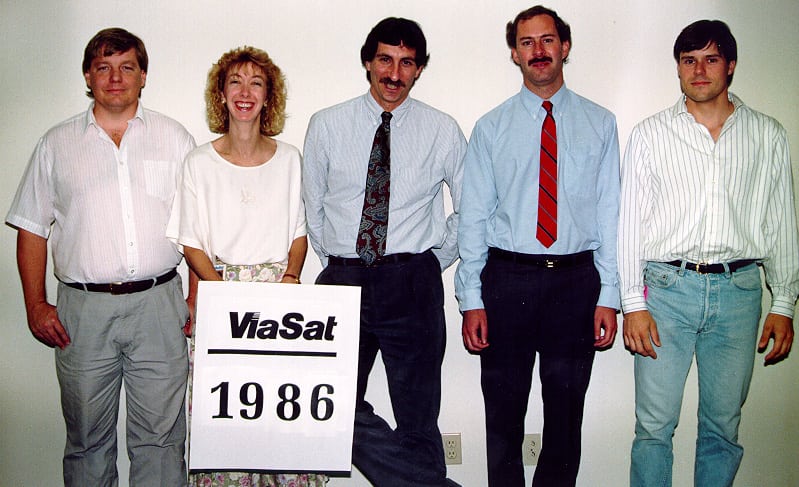 Armed with Macintosh computers and dreams of creating a strong business, ViaSat was started. However, its path to success, like many start-ups was by no means assured. In an early twist of fate, Dankberg would be pitched against his mentors Jacobs and Viterbi. Describing the situation as “a little bit funny,” Dankberg says, “[For] one of the first projects we were working on, we were on a team of companies that were competing with Qualcomm. We were the lead technical people on our team and Qualcomm was the lead on their team. We were going to a meeting with a customer where Irwin Jacobs gave a presentation on their side, and we gave ours. Irwin was such a good presenter, but it was really fun doing our own. We never looked back.”

However, that was not the only challenge. Even getting funding during a potentially prosperous period for communications was far from easy. In the 1980s, while there was a boom of venture capital, a start-up business basing its business plan on selling technology to the defense sector was not common.

“When we started, we were really more in the defense business, and that was tricky to do as a venture-capital based start-up. You couldn’t develop a product the way you could in the commercial world. So, that made it much more a bootstrap type environment,” says Dankberg. “We would get a research and study project worth $50,000 and try and turn that into a real program. That small-business type of innovation was a very good avenue for us to build the company. I didn’t think of it as scary and daunting. We were making progress and having a good time doing it.”

To build the business, the team had to take on projects that it would have not looked twice at while working at Linkabit. One such example was working for a company called Fairchild and building test sets for modems. There was a project for Fairchild that Dankberg had looked at doing for the U.S. Army back when he was at Linkabit; however, he had declined to bid on it because the level of difficulty was high and the dollar value was low. The objective was to build an extremely precisely signal-to-noise ratio measurement device. Linkabit’s attitude was this project was just was not worth it, but for a start-up like ViaSat, it represented an opportunity.

“We took on the same job with much less money working as a sub-contractor, and it enabled us to get into the production business, and that was a breakthrough for us. We built a few hundred of them for the Army. That established [for] us a reputation to build products. We advanced into building networks and modems later on,” says Dankberg.

ViaSat has had its tough times. In 2001, the company would be tested to the limit when, after having made a strategic move into satellite broadband, this nascent industry was on the verge of collapsing like a house of cards. What should have been a boom time for the company rapidly turned into a nightmare that would result in its first lay offs. The company’s future seemed to be in jeopardy.

In 2001, ViaSat had won contracts for three big broadband programs, which should have been the catalyst for helping the company enter a new growth phase. The company won the modem contract for Boeing for its Connexion program, two big contracts with Astrolink to do all of their ground infrastructure and all their terminals, and a contract with WildBlue to also do all their ground infrastructure and terminals. However, the period following 9/11 and the bursting of the telecoms bubble would see this sector dramatically implode.

“Connexion did not end but went into a hiatus. WildBlue went into suspended animation, and Astrolink went out of business. Those three things were a huge setback for us. Astrolink was a huge problem for us. They were insolvent and basically owed us a lot of money. Astrolink’s two largest suppliers were its biggest investors, TRW and Lockheed, and after that we were their next ‘biggest’ supplier and contractor, and we were a little company. We were a $150 million company at that point,” says Dankberg. “They went out of business overnight, and that was really devastating. It was the first time we had to lay any people off. At the end, Lockheed came back and settled some of Astrolink’s debt to us, but that was a really stressful time.”

However, while this was undoubtedly the toughest period in the company’s history, ViaSat always believed there was a strong opportunity for satellite companies in the residential broadband market. “The commercial industry became a lot more challenging, [but] there were a lot more interesting problems and [it] was going a lot faster than the defense business. In the late 1990s, early 2000s, we could see that bandwidth was going to be the dominant issue, and that demand for broadband was coming along. What was interesting for us was that we had done all these defense networks which had very little bandwidth. We were experts at squeezing the most bandwidth out of satellite systems, and we had a pretty good idea of what the bottlenecks were,” Dankberg says. “It played well into the things we were doing.” 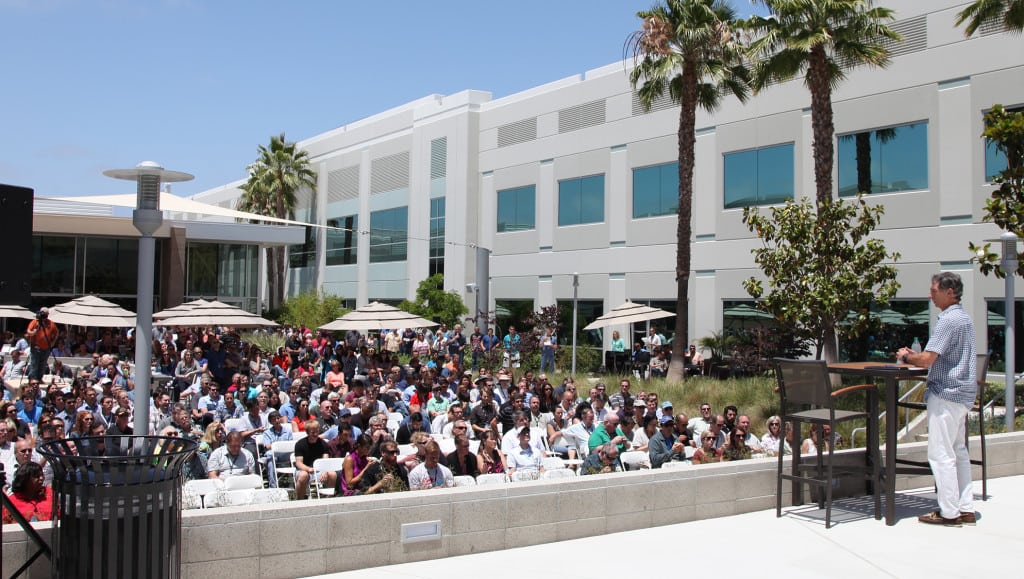 Dankberg speaking to an all-hands meeting this month at ViaSat’s Carlsbad campus. Photo courtesy of ViaSat.

Entrepreneurs and the Satellite Sector

“If you look at PanAmSat, that was someone not really within the satellite ‘establishment.’ DirecTV and Dish are also further examples. Dish was a certainly an entrepreneurial effort. A lot of the biggest changes have come from people that wanted to do something different. You don’t just see this in the satellite space, but also in other spaces as well. People in the industry for a while will introduce new technologies, but they don’t like introducing new business models. It is new business models that cause fundamental change. I think there will be more change going on,” he says.

Even for a company like ViaSat, the key is to continue bringing change, rather than just growing business in established sectors.

“If you look at ViaSat, we have evolved from business to business and we have done this four or five times in our history. One of the things I like is for us not to get too comfortable with the business model. I would rather disrupt industries than be the disrupted. We have spent a lot of conscious thought in terms of how business models will evolve. There is plenty of opportunity in that,” Dankberg says. VS