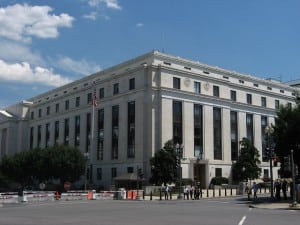 [Via Satellite 06-25-2014] AT&T President and CEO Randall Stephenson and DirecTV Chairman and CEO Michael White presented before Congress on June 24, 2014, to explain their desire to merge into a single company. The executives argued that their companies today lack significant competitive overlap with each other, and that the combined company, with 26 million subscribers, should not be perceived as an antitrust concern.

White described DirecTV as an “American success story,” pointing to how the satellite pay-TV company has stood its ground among cable-based competitors. But he said the evolution of video is forcing the company to change strategies.

“Much has changed [in recent years], particularly the growth of broadband. If we at DirecTV want to continue to compete in today’s increasingly Internet-driven economy, we must adapt as well,” White said during the Senate Judiciary Committee Hearing.

Stephenson pointed to the lack of success AT&T has had with U-Verse, its fiber-based communications network through which the company provides digital TV among other services. Less than 2 percent of AT&T’s TV customers purchase TV services on a standalone basis. According to Stephenson, 60 cents of every dollar AT&T earns on video goes straight to programmers, causing U-Verse to struggle in its current state.

“We don’t actively market standalone video because we don’t make any money off of it … we lose money on video. As we move programming costs to look more like DirecTV’s programming costs, it changes the dynamic of our video product. We suddenly go from video being a loser to a profitable service, and now our broadband build is not burdened by a money-losing proposition on video,” said Stephenson.

Currently, AT&T bundles services, especially broadband and TV, in order to compete against cable. White said the combined company would bring broadband and video services to 15 million new locations across predominantly rural areas in 48 states. Several industry advocates opposed the merger of the communications giants, concerned that it would put greater constrains on independent programming, and that the increased industry consolidation would influence programmers like Viacom and CBS to seek mergers as well.

“It is no accident that a flurry of mergers is occurring in response to the potential democratization of the entertainment industry,” Christopher Keyser, president of The Writers Guild of America West, told the Senate Committee. “The largest multi-channel video programming distributors and Internet service providers have every reason to fear and every incentive to limit the growth of online video competition that could threaten its dominance. If this merger and the [Comcast–Time Warner Cable] merger are approved, the two resulting companies will control more than half of the [Multichannel Video Programming Distributor] (MVPD) subscribers and half of the wired Internet access market. They will have unprecedented power to control the content that passes to you.”

Larry Downes, project director at Georgetown University’s Center for Business and Public Policy, called the proposed transaction a “largely defensive move.” At the hearing, he said it would breathe life into AT&T’s U-Verse by providing access to DirecTV’s much larger audience. Likewise, DirecTV would benefit from AT&T’s broadband network, giving it access to Over-The-Top (OTT) services. Broadband stood out as a main incentive for the acquisition. Stephenson added that Internet is not something DirecTV is currently able to support very well.

“One thing that is very important to note is, and with all due respect to Mr. White, satellite is not a particularly good technology so far — at least the physics of it don’t seem to really work very well — as a way of communicating broadband speeds. So if DirecTV is going to remain a viable competitor in this market, it really needs not just a better integrated broadband but really, natively broadband technology,” said Stephenson.

But for all the debate over broadband, the merger is contingent upon DirecTV’s ability to renew its agreement with the National Football League (NFL) to broadcast the NFL Sunday Ticket sports package, which carries every out of market Sunday game. AT&T is looking at bringing Sunday Ticket games to mobile devices, should the merger complete.

The major concern for attendees of the hearing was that pricing would rise for TV and broadband services, regardless of the executives’ attempts to assuage this fear. AT&T believes it can drop content costs by as much as 15 percent, which it claims are rising by roughly 8 percent per year. Stephenson said AT&T is raising rates for customers at about half the rate of content costs and that combined, the new DirecTV-AT&T entity would see margins competed away. Not everyone was convinced.

“If I am the ordinary consumer, I’m rolling my eyes because I have seen this show before,” said Sen. Richard Blumenthal, D-Conn., at the hearing. “In the communications landscape I’ve seen mergers, consolidation and most importantly, inexorably, relentlessly rising cable rates. So I am very, very skeptical.”

“You don’t hear them saying that there will actually be lower prices because of this,” added Matthew Wood, policy director at Free Press at the hearing. “There will be downward pressure and economic theory, but … there is no indication that even if those savings are real they will actually pass along to the customers in any meaningful way.”

Neither CEO could give a definitive answer as to what impact the merger would have on customer pricing for services. Instead, the closest they could get was that the merger would stem the rise in price increases. Congress does not decide the $48.5 billion merger, though it has been debated in both the House and the Senate. The Federal Communications Commission (FCC) and the Department of Justice must determine whether or not the merger would break antitrust laws and if it is in the public’s best interest.