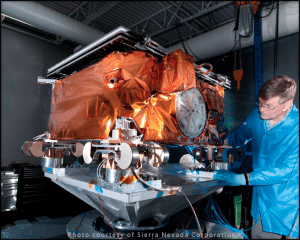 [Via Satellite 03-24-2014] With the launch of the first six satellites coming up at the end of April, Orbcomm is planning to offer two new services that the company hopes will greatly expand its share of the M2M market. Each OG2 satellite has 85 times the on-board memory, eight times the number of receivers and six times the number of transmitters than its OG1 predecessor. Using fully backwards-compatible technology, Orbcomm plans to integrate the new satellites into the old fleet, filling a hole in the company’s current coverage as well as providing a means to deliver more capabilities.

“One satellite will have more capacity than today’s constellation,” said Marc Eisenberg, CEO of Orbcomm. “We’re creating two new services with the next generation spacecraft. One of them is a more data-intensive service where instead of opening up a channel in OG1 and passing through over a hundred bytes, and then closing it down, we can open up the channel, send hundreds of bytes or kilobytes, and then close it … you can dedicate specific receivers to that service and you can interchange change the transceivers to support different services over time.”

This new service will allow Orbcomm to be much more efficient with its allocation of bandwidth. OG2 will be able to switch between different modes of operation to match the ebb and flow of different demands. OG1 was not capable of this level of flexibility.

Orbcomm’s other new service focuses on slightly slowing down message speeds in order to open up new applications. OG2 is still designed to be faster than the current constellation and, according to Eisenberg, the slow-down will be limited so that when used, messages will still transmit in under a second.

“By slowing down the message transfer, we are drastically going to improve the gain, and when you improve the gain plus when you operate in Very High Frequency (VHF)  like we do, you’ll either be able to shrink the antenna, or you’ll be able to work in a lot of indoor settings,” he said. “And that’s essentially a first for a commercial satellite company.”

Assets that travel indoors and outdoors — typical for some warehouse settings — will not be lost from the satellite’s perspective when under a roof. Providing M2M connectivity indoors will help Orbcomm move into new markets in which the company has already shown interest, such as healthcare and the connected home.

“The neat thing about monitoring homes is, the homes that are out of terrestrial service are also the most expensive to service,” explained Eisenberg. “If we can put connectivity on those homes there are lots of things we can do …  there are M2M metering applications that you can do, and we can do it very cost effectively with OG2.”

Another update for the OG2 constellation is a new GPS satellite-interface that will provide network users with the ability to perform hot starts based on location. According to Eisenberg, this type of task typically takes a few minutes to complete, depending on location. With OG2, M2M connected devices will start comfortably under 30 seconds. Additionally, all OG2 modems will know where their satellites are in order to save power, he said. This was a problem Orbcomm’s OG1 constellation had, where modems would continue to search for satellites even if there were none overhead.

“What would happen is, if there was a gap in coverage, the modem would keep trying, but with OG2, the modems are going to know where the satellites are,” said Eisenberg. “It won’t try to transmit unless it knows a satellite is overhead. We are going to go from one of the most inefficient networks — for battery power — to one of the most efficient.”

SpaceX is slated to launch the full OG2 constellation this year, with the first launch occurring in the first half of 2014 and the second in the latter. The satellites, though still considered small, are four times the size of OG1 satellites and have three times the power. Once the new constellation is complete, Orbcomm will use both OG1 and OG2 in order to provide global coverage.

“We’ve received lots of interest in the OG2 constellation so far,” said Eisenberg. “The M2M business is growing at a very quick pace and I think the interest level will continue to climb now that we’ve got modems available. People can start their development.”