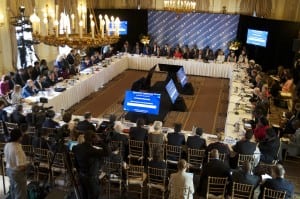 The 8th meeting of the Broadband Commission for Digital Development.
Photo: ITU

[Via Satellite 09-24-2013] The United Nations Broadband Commission for Digital Development has released its latest country-by-country data on state of broadband access worldwide. According to the report, which is released annually in New York, decent progress has been made to reach four key targets set by the 60 members of the commission in 2011.

In terms of the first target of making broadband policy universal, the State of Broadband report shows good progress with 134 countries having a National Broadband Plan (NBP) in place by mid-2013. Progress in the second target, making broadband services affordable, is varied. The number of countries with affordable services is stagnant, but there is good progress with a rising number of countries approaching the target, the report states. The third and fourth targets, Internet usage and household connectivity, are unlikely to be achieved by the target date of 2015 at current growth rates, according to the report. 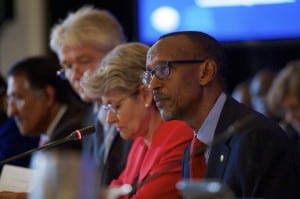 “Beyond 2015, the way forward should be to unleash the smart use of broadband to enhance delivery of services in education, healthcare, banking and other sectors.‎ Broadband should also empower young people in the developing world to innovate and be more competitive globally,” said Co-Chair President Paul Kagame to the Commission.

The report also states that there are currently more than 70 countries where more than 50 percent of the population is online. Eight of the top 10 countries for Internet use are all located in Europe, with Iceland in the lead with 96 percent. The exceptions, New Zealand and Qatar, are listed in eighth and tenth place, respectively. 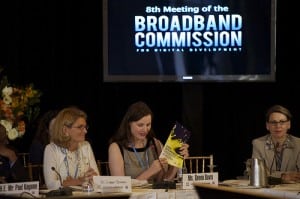 Academy Award-winning actor and advocate Geena Davis at the 8th meeting of the Broadband Commission.

The State of Broadband report also tracks a new target that guides gender equality in broadband access by the year 2020. Worldwide, women are less likely to have access to technology than their male counterparts. While the gap is barely noticeable in the developed nations, it becomes more obvious in developing countries, where 16 percent fewer women than men use the Internet, compared with only 2 percent fewer women than men in the developed world, according to the ITU. Without additional action, Intel predicts the gender gap could grow to a total of 350 million Internet users in three years’ time. Closing the gender gap would bring wireless benefits to an additional 300 million women, making tools, mentors and opportunities to fully participate in the economy and unlock their potential more accessible, explains the report.

The full U.N. Broadband Commission’s meeting hosted approximately 50 Commission members and special guests such as Nigeria’s Minister for Communication Technology, Omobola Johnson; Executive Director of U.N. Women, Phumzile Mlambo-Ngcuka; Academy Award winning actor and advocate, Geena Davis; and U.N. Envoy for Youth, Ahmad Alhindawi. During the meeting, a new working group on financing was established. This working group will strive to identify potential solutions to broadband investment to help countries accelerate progress toward the targets. The working group will deliver its first findings to the Commission at the next meeting in Dublin, in March 2014.