Brazil Banking Sector to Get a Boost by Inmarsat, Onixsat Partnership 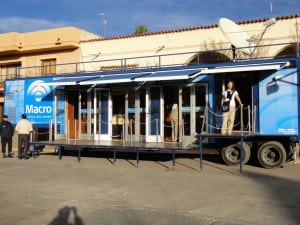 Mobile ATMs would be one of the services the Inmarsat/Onixsat partnership will be able to offer in Brazil.
Image credit: Clara & James Dunning

“Brazil is a particular focus for Inmarsat in 2013,” said Kate Montgomery, Inmarsat’s director of enterprise industry for Latin America, during an exclusive interview with ViaSatellite.com. “You have a growing middle class that demands only a high standard of banking services wherever they may be … and at the same time you have government pressure to make sure that banking services and the economic capabilities that they unlock are also taken out to rural communities.”

Inmarsat’s global, IP encrypted BGAN M2M satellite services can enable banks to establish remote and temporary branches securely connected to their head office. It also affords the opportunity for shops, restaurants and hotels, among other businesses, to accept card payments using electronic point-of-sale (PoS) devices, which are connected to the merchant acquirer via a highly secure and reliable connection.

Being partners for almost 15 years, Onixsat came as a clear choice for Inmarsat to deploy its BGAN M2M services in Brazil. According to Igor Falcão, telecom manager at Onixsat, the company has around 100,000 Inmarsat satellite systems activated in the country and Onixsat is looking to grow this number by 17 to 20 percent in the next 12 months.

“Onixsat works across all the Inmarsat markets. We work in transportation, utilities, oil and gas, telecom, and exploring the financial sector is a key project for us in 2013, probably one of the most important projects that we’re looking at because the financial market is a new market for us and it is a very high demanding market; there are a lot of opportunities,” Falcão said during an exclusive interview with ViaSatellite.com.

As BGAN M2M is able to provide stable and secure connectivity in rural areas, Montgomery believes it is highly suitable for the banking sector and that it will play a key role in Brazil. Still, Inmarsat and Onixsat looked at different success stories around the globe for using satellite connectivity for the financial market such as a case study with the Ghana International Bank, and deployment of mobile ATMs in the United States.

So far, with the support of the British embassy in Brazil, the companies have met with many of the largest banks in the country, both private and public, as well as banking technology organizations, and the connectivity operators of PoS devices and ATMs; “and we’ve had good response from all of them,” Montgomery said.

In fact, Onixsat has started implementing a series of pilot projects in Brazil, actually embedding BGAN M2M in the banks’ connectivity infrastructure to see what the results yield. For this, Falcão said its team partnered with an ATM manufacturer in the south of Brazil. “We’ve got eight ATMs connected to one BGAN M2M and we’ll be testing for about the next four weeks or so and there should be a commercial opportunity within the next two months or so,” he said.

While the response has been positive so far, Montgomery said they want to take things slowly because of the nature of the banking and finance sector. “This is a sector that values very much their security and the value of their data,” she said. “We just need to make sure that the banks are aware of Inmarsat’s pedigree and the reliability and the security of our network.”

For Falcão, the main challenge will be to educate the customers, “show them that there is a new solution available in the market right now form a company that works on the satellite markets,” he said. “Educate the customers to show them that when you have a satellite communication, we give them a 99.9 percent of the availability.” According to Inmarsat, all BGAN services use the I-4 satellite network, which is essentially a global 3G network operating at 99.9 percent availability.

The project is targeted to initially serve the north and northeast regions of Brazil, which have the least communications infrastructure and are most affected by heavy rain, Montgomery said. These challenges make Inmarsat “quite a nice fit because we’re operators of the L-band so we’re not affected by rain,” she said.

“M2M is a key focus for Inmarsat in 2013, we have just launch regional pricing for Latin America and some of the other key regions across the world and once we have benchmarked the technical requirements and the customer experience, this is something that we will make available for all our distributors on a global basis,” Montgomery said.