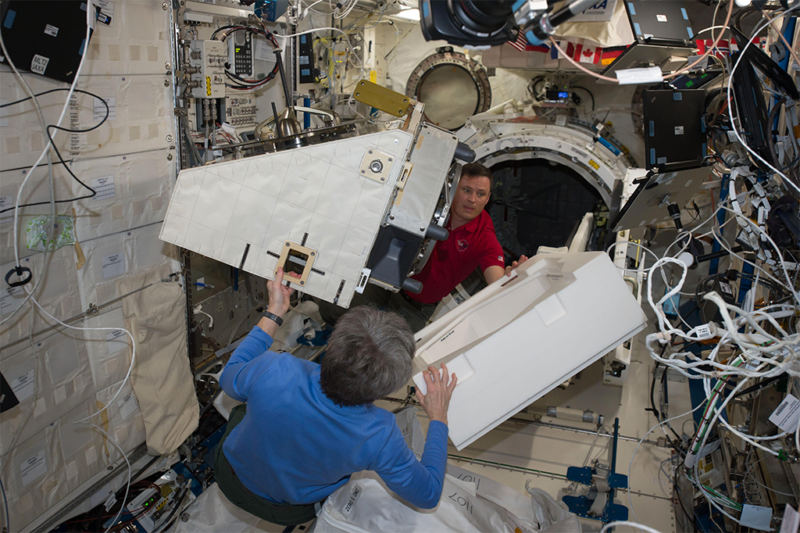 NASA astronauts Peggy Whitson and Jack Fischer move a new payload on to the NanoRacks External Platform to prepare for deployment from ISS. Photo: NASA.

NanoRacks announced that it has chosen Thales Alenia Space as the latest partner in its commercial airlock program. Thales Alenia Space will produce and test the critical pressure shell for NanoRacks’ Airlock Module, which is targeting to be launched to the International Space Station (ISS) late 2019, and will be used to deploy commercial and government payloads.

“Thales Alenia Space was the obvious choice when it came to fabricating our Airlock’s pressure shell,” said Brock Howe, NanoRacks’ head of airlock. “Thales Alenia has manufactured over half of the Space Station’s pressurized volume, they understand the space station’s systems and they have produced some of the world’s best aerospace hardware.”

NanoRacks signed a Space Act Agreement with NASA in 2016 to install the first-ever private Airlock Module on ISS. In February 2017, NanoRacks announced a partnership with Boeing to build and install the Passive Common Berthing Mechanism (PCBM), which will connect the Airlock to the rest of the ISS.

Thales Alenia Space will produce and test the pressure shell this year, then ship it to NanoRacks’ Integration Facility in Houston, Texas in 2019. NanoRacks will integrate the avionics and wiring to complete the airlock assembly.

NanoRacks’ engineering and operations teams will handle airlock integration, functional testing, crew training and final inspections. The Airlock will be then shipped to Florida for final pre-launch preparations and installation on the SpaceX Dragon Trunk, to get ready for the scheduled launch on the SpaceX CRS 19 mission. NanoRacks also teamed up with ATA Engineering and Oceaneering on the airlock’s subsystems.