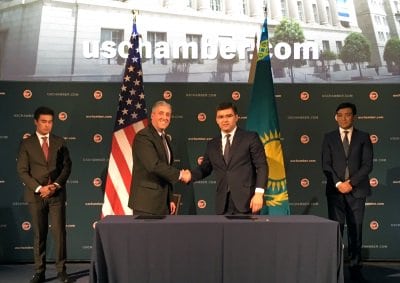 iDirect, Ghalam to explore the development of cost-effective technologies that bridge the digital divide in the Kazakhstan region. Photo: iDirect

VT iDirect has signed a Memorandum of Understanding (MoU) with Ghalam, a Kazakhstan Airbus Defence and Space joint venture, to explore the development of next-generation ground technologies to support initiatives that bridge the digital divide in the region, particularly the Kazakhstan-2050 Strategy and “Digital Kazakhstan” government program. VT iDirect will support Ghalam in developing technologies to tackle digital divide issues, and provide connectivity to the population in a cost-effective manner. The collaboration will also provide access to DVB-S2X technology, according to the companies.

“Our partnership with VT iDirect will enable us to expand on the digitalization of Kazakhstan and become a known hub of technology in the world,” said Aibergen Ruslanuly, general director at Ghalam.

Kazakhstan’s president had laid out concrete plans in the “Kazakhstan 2050 Strategy,” calling for Kazakhstan to be among the top 30 global economies by 2050. Part of its initiative includes the creation of new sources of expertise and economic growth. With that in mind, Ghalam formed a state-of-the-art laboratory and testing facility at the National Space Centre, where their engineers will work alongside global technological leaders to manufacture satellite and ground segment equipment, and test space technologies.

Ghalam is an operator of the Spacecraft Assembling and Integration Test Complex (SBIK) in the Commonwealth of Independent States. It designs and manufactures different spacecraft, satellite and ground segment components for space and other high-tech industries. Engineers and staff of Ghalam are certified according to European standards and trained at leading aerospace companies.