Satellite Servicing: Coming to an Orbital Location Near You – From our archive

Satellite servicing is considered a holy grail for the satellite industry. The principle is sound: you put a satellite up, and after a few years complete certain repairs or improvements to extend the asset’s operational lifetime. It sounds so simple in theory but it is much harder in practice. While the topic has come into sharp focus in recent months, it has actually been talked about for a number of years. In this story from our archives, we look back at the satellite servicing debate in 2011, and what key players in the industry thought about where this nascent industry was heading. This article was originally published in the October 2011 issue of Via Satellite. 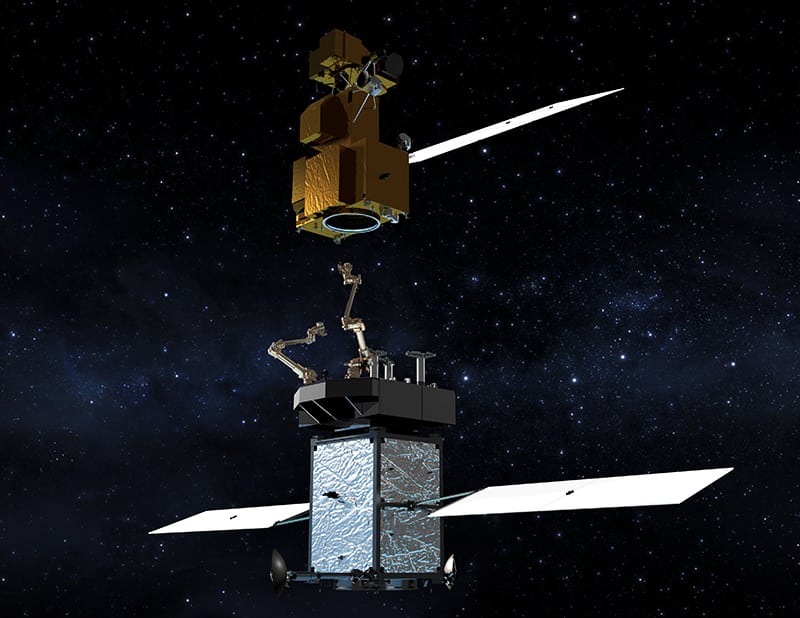 The topic of servicing in-orbit satellite assets was already a hot talking point for the industry when Intelsat announced a deal with MacDonald, Dettwiler and Associates (MDA) in March to service its on-orbit satellites via a space-based service vehicle.

Jacob Gullish, director, Space & Telecommuunications, Futron, says the refueling satellite concept had been “a long time coming” and that the deal between Intelsat and MDA represents an important milestone for the industry.

MDA plans to launch its Space Infrastructure Servicing (SIS) vehicle, which utilizes a sophisticated robotics and docking system, into near geosynchronous orbit where it will service commercial and government satellites in need of additional fuel, repositioning or other maintenance. The SIS vehicle’s robotic arm could also be used to perform critical maintenance and repair tasks, such as releasing jammed deployable arrays and stabilizing or towing smaller space objects or debris.

For MDA, the deal was a validation of a vision to build a strong long-term business in this area, but it did not happen overnight. “We have been doing manipulation of objects in space for a long time and we felt good about taking our capabilities and moving them into commercial servicing. We looked at the on-orbit servicing value proposition and felt that with our heritage and our capabilities, we would be able to refuel existing satellites. What we really needed to do so that we had confidence in our capability and [had] something that would be of interest to the market was find an anchor customer. We worked with Intelsat over a period of three years,” says Steve Oldham, MDA president of Space Infrastructure Services (SIS).

Oldham believes the deal with Intelsat has given the company extra impetus as it seeks to sign commercial deals with other operators. “We have pre-sold half of our fuel to Intelsat. I only have half a tank left. What I am doing is talking to satellite operators and saying ‘I know you want to hang on and wait and see this working, but what if I end up selling the rest of this capacity?’”

MDA is not the only company looking to target this market and breathe new life into old satellites. U.S. Space and ATK established ViviSat as a new company earlier this year to bring a new dimension to the satellite servicing market. It brings to the table its Mission Extension Vehicle (MEV) — a spacecraft that aims to connect to an orbiting satellite in order to provide supplemental attitude and propulsive capabilities without disruption to the client satellite’s operation. The MEV utilizes a space-ready docking system and a suite of integrated proximity sensors to securely rendezvous with the host satellite. ViviSat hopes to offer a range of services to operators, including: rendezvous and docking without interruption to operations of the client satellite; long-term station-keeping and attitude control; relocation of satellites to different orbital slots or to different orbit; de-orbiting satellites that are at the end of their lives; as well as rescuing and re-orbiting of satellites stranded in incorrect orbits.

Discussions between ViviSat and satellite operators “have seasoned well” during the past six months and have reached the point where there has been an exchange of due diligence materials, according to ViviSat COO Bryan McGuirk. He believes that the deal between Intelsat and MDA provided a positive impact on ViviSat’s efforts to seek its first anchor customer agreement. “I am optimistic by virtue of having a competitor enter the market. The Intelsat deal with MDA actually improved the dynamic for us. Satellite operators are no longer saying to us, ‘Prove to us that this can be done.’ Instead, they are saying ‘How does yours work, and why is it different?’ We believe we can talk about things like lower risk and flexibility rather than talking about whether something like this can be done,” says McGuirk.

MDA also is confident of more deals in the pipeline, however, Oldham admits that it will take some time to sell these services. “MDA has seen interest from a number of operators, and has gone past the starting point in terms of these discussions,” says Oldham. The company hopes to sign more agreements before it launches services.

As new satellites become more expensive and require substantial financial commitment, satellite operators are finding compelling reasons to explore servicing technology. Thierry Guillemin, CTO, Intelsat, says that his company has always held a long-term interest in the concepts of satellite refueling and in-orbit servicing, but it was only when MDA came along that it felt ready to take the plunge in MDA’s approach.

“So far, satellite servicing concepts would typically require a dedicated servicing satellite to extend the life of an existing communication satellite. MDA’s innovation is using advanced robotics to create the ability to actually refuel many satellites with one servicing platform. The robotics also provides in-orbit capability for ad hoc troubleshooting of anomalies like appendage deployment issues. Flexibility is the key,” says Guillemin.

To mitigate the risks associated with such a deal, Guillemin says that Intelsat’s commitment is predicated on MDA’s successful implementation of the service as a customer and that in-orbit operations will be first validated on satellites at the end of their fuel life at a safe distance above geostationary orbit. “All components of the mission, from fuel transfer to orbital rendezvous to robotics operations, have been demonstrated in orbit before,” says Guillemin. “MDA needs to bring this capability to geostationary orbit as an end-to-end service. They have acquired an extensive robotics experience on NASA missions, and we expect that this fruitful cooperation will continue in the future. They are working on putting together the right industrial team. Intelsat brings a substantial level of programmatic and operational experience and a large fleet with servicing opportunities.”

For MDA and ViviSat to be successful, other operators will need to be persuaded of the benefits of such services even with Intelsat as a backing customer, according to Romain Bausch, CEO, SES. While refueling and servicing satellites are on the operator’s radar, Bausch admits that the technology is not a top priority. “First, we believe it will take years before one or another of these services become available. So, there is no real need to be in a rush. Second, there are other initiatives which are much more important for our development.”

Intelsat, however, is already a believer in this concept and is confident that its partnership with MDA can reap rich, early-adoption rewards. “We are confident that, as the service is being developed, there will be strong demand from government and commercial satellite operators. Intelsat’s initial focus is on its own fleet, but Intelsat is also MDA’s sales channel to the U.S. government, another large satellite operator. The U.S. government’s satellites are typically more expensive than commercial, and so the economic advantage would be even greater. The U.S. government also experiences ‘gaps’ in between satellite programs that refueling the legacy fleet may help close,” says Guillemin.

Need for Such Capabilities

Considering the pace of change in technology, the size of the market to extend the life of space assets will be essential in determining its value for operators, especially as some of their new assets will be almost two decades old by the time they need servicing and refueling, says Prashant Butani, a satellite analyst at NSR. “Even though it may be possible to do this, does it make sense? Given the way satellites are evolving and that every orbital slot is being replaced by higher and higher throughput satellites, be it either shifting frequency bands or increasing the scope of the satellite, I am not sure that every satellite operator would see value in furthering the life of an existing satellite if it has already served a good 10-12 year period,” he says.

McGuirk emphasizes that such concepts will only apply to certain satellites in certain slots. “No one here is saying that satellite life extension is applicable 100 percent of the time, but there is a majority of cases where operators are replacing like for like, and often times power limited by the [International Telecommunication Union] ITU,” says McGuirk. “In these cases there is nothing you can do in terms of bringing new technology, which will change the economics of that slot. These like for like replacements are out there, and those are the missions where our MEV will be most effective.”

The question of whether to order a new satellite or squeeze more out of an existing asset is more difficult to answer. Oldham compares it to the secondhand car market. “When I choose to sell my car, I am done with that; I want a brand new shiny one. But, the guy who buys my car is thrilled to bits because it meets his needs. What we find is that there is a fleet management opportunity that comes up for satellite operators when they are able to use much more flexibility in how they use their satellites. So, there are benefits in keeping the older satellites in certain markets, and there are financial benefits in deferring the costs of replacement.”

In terms of fleet planning, McGuirk believes that the services offered by ViviSat and MDA make a lot of sense and could prove attractive to shareholders of satellite operators who want to get the most out of their available capital. “I can tell you from the discussions we have had with operators that some are saying more than 70 percent of their fleet is being retired with every subsystem working sans propulsion. These satellites are simply running out of gas. That, in itself, provides a major opportunity to improve the economics of fleet planning. If an operator can extend the life of a working satellite for a fraction of the cost that they can purchase a new one, it lowers the cost of its overall fleet years. As a former operator and having sat in that chair, lower costs of product drive stock prices upwards. This positive scenario would ultimately create more opportunities for the industry to do more missions and to grow, which is one of the most important things that our industry needs to do,” he says.

Gullish says operators are likely to view these services in an opportunistic sense, as satellite servicing solutions balance the cost of the extension with revenue gains alongside technical and risk concerns. “Given that most satellites are rated for 15-year life spans, there are often a number of anomalies on older satellites. Many satellites are past their prime during the time that this service would be most useful. Additionally, satellite technology advances incrementally, so older satellites represent dated technology. All of these factors will go into a customized evaluation as to whether or not an additional few years is worth the cost. In some cases, the answer is ‘yes,’ and in others, the answer is ‘no.’ The core issue is, collectively, are there enough yes’s to support the MDA business model,” he says.