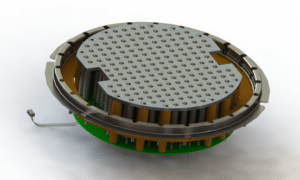 According to PacSci EMC, the MAPS system provides fine slewing and pointing attitude control in all three axes and a robust orbit raising capability with greater than 50 meters per second of delta V in a 1U form factor. This capability can be scaled based on mission requirements and can be custom fit for a range of interfaces and exterior surfaces minimizing impact on satellite internals. MAPS can be used on CubeSats and SmallSats for attitude control, deorbit, drag makeup, and plane and altitude changes.

“Due to our success, we are excited to announce that our MAPS technology is now commercially available to satellite manufacturers and operators,” said Greg Scaven, PacSci EMC’s president.

MAPS has a 10-plus year on-orbit lifetime, uses very low power, has three independent inhibits against firing, and provides variable thrust by firing in pairs, triples, quads, etc. According to PacSci EMC, the system is adaptable and can fit in an unused separation system or other spacecraft real estate. MAPS may be configured as a standalone system or with an integral Guidance, Navigation and Control (GN&C) system.

Tyvak, a Terran Orbital subsidiary, built and operates the PacSciSat satellite along with its MAPS payload. It launched on June 22 aboard the India Space Research Organization’s (ISRO) Polar Satellite Launch Vehicle (PSLV) from the Satish Dhawan Space Center in India.