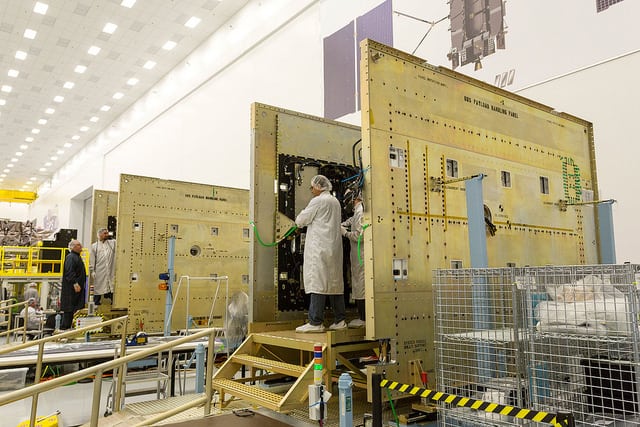 In a specialized cleanroom designed to streamline satellite production, Lockheed Martin is in full production building GPS 3, the next-generation constellation of GPS satellites. The company’s second GPS 3 satellite is now assembled and preparing for environmental testing, and the third satellite is close behind, having just received its navigation payload.

“Now fully-integrated, GPS 3 SV02 will begin environmental testing this summer to ensure the satellite is ready for the rigors of space,” said Mark Stewart, vice president of navigation systems for Lockheed Martin. “This testing simulates harsh launch and space environments the satellite will endure, and further reduces any risk prior to it being available for launch in 2018.”

This next generation of GPS satellites will have three times better accuracy and up to eight times improved anti-jamming capabilities, according to the company. Spacecraft life will extend to 15 years, 25 percent longer than the newest GPS satellites on-orbit today.