Is 3D Printing the Future of Satellite Manufacturing? 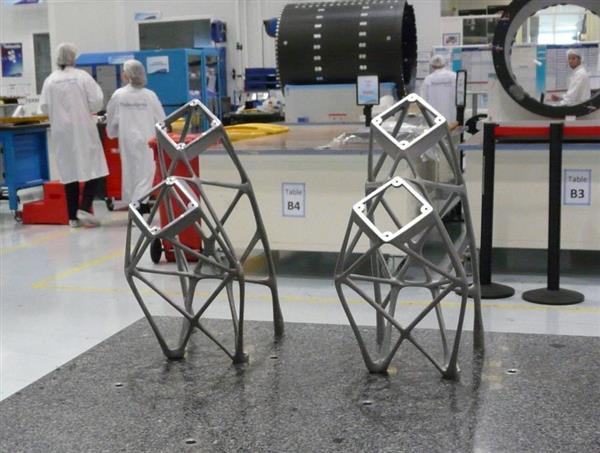 Thales Alenia Space has seen massive savings in time and cost for the manufacturing of its products thanks to 3D printing, said Florent Lebrun, who heads space antenna development at the company. With this new manufacturing process, not only can Thales cut production lead time for certain components from months to weeks, it can save up to 50 percent on expenditure per part, he said.

Thales began experimenting with 3D printing, or additive manufacturing, in 2013, when it produced its first few demonstrator products. In 2015, it implemented a 3D-printed part for the first time on a telecommunications satellite — an antenna horn mounting strut for TurkmenAlem52E/MonacoSat. The company also produced eight titanium antenna fittings for Arabsat 6B that year, Lebrun said.

Now, two years later, after the launch of SGDC 1, Telkom 3S and Koreasat 7, Thales has orbited around 80 3D-printed parts, with more than 120 additional parts produced this year for future applications.

One of the biggest benefits to leveraging 3D printing, Lebrun said, is that it opens up new design opportunities from the very beginning. “With this technology you can produce more new shapes than was previously possible. You can produce more complex and efficient shapes, mechanically speaking,” he said, which includes parts with curves and cavities, for example. “This is of high benefit for us because, with the same mass, you can obtain fittings, for example, with better thermal distortion behavior,” he said.

With traditional processes, the cost of manufacturing a part can increase exponentially as it becomes more complex. “This is not the case with additive manufacturing technology,” Lebrun said. Because 3D printing allows for the manufacturing of single-piece structures, rather than the traditional method of assembling separate parts into one component, it provides a significant reduction in weight and cost while also potentially enabling new functions.

The 3D-printed propulsion system tube supports Thales installed on the first set of Iridium Next satellites is a prime example. “Our development efforts are now focusing on integrating several functions in a single part, such as mechanical, thermal and Radio Frequency (RF) functions,” commented Florence Montredon, additive manufacturing technology development manager at Thales, at the time.

Thales engineers can leverage 3D printing to take full advantage of a new design method called topology optimization. According to Lebrun, the design of a structure is obtained directly through computation after engineers input a given set of constraints, such as space volume. “Today all these parts are designed using the topology optimization process,” he said. “You can retain very efficient, organic shapes this way.”

Another added benefit with 3D printing is that Thales engineers can use the same materials they have traditionally used. Lebrun highlighted aluminum and titanium in particular — the company uses titanium for its low thermal expansion coefficient, and aluminum for its low weight.

Lebrun pointed out too that the decreased lead time 3D printing offers means the company is able to test many configurations and design iterations before landing on a final product. Lebrun said Thales Alenia Space will continue exploring the potential use cases for 3D printed parts in space applications, and believes the technology will enable the company to drastically increase the performance of its payloads as it moves into the future. “With this technology we can do more compact systems, and we can also incidentally reduce the mass,” Lebrun said. “This way, you can put more antennas on the satellite and the global benefit will be very interesting for our customers.”

“This is only the beginning of the story,” he added.