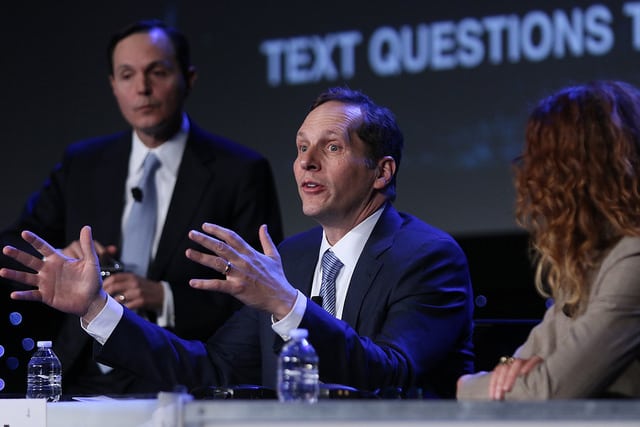 By the mid-21st century, businesses in nearly every industry on the planet will have to leverage Big Data to stay competitive, according to a panel of experts at the 33rd Space Symposium in Colorado Springs, Colorado. Without an in-house ability to analyze large datasets, running a business will become increasingly difficult, said Chris Boshuizen, entrepreneur in residence at Data Collective VC. And while this isn’t limited to the space industry due to the world’s entry into what he calls a “data-centric economy,” Boshuizen pointed out that space companies in particular are “on average a little behind in terms of the adoption of machine learning … and really using the data as a core part of the business.”

This is ironic because space companies were some of the first to adopt computers into their workflows, he said. “I think [it is] just like the train system and train infrastructure in the United States. The U.S. was one of the first countries to build a transcontinental railway but now it’s over 100 years old.” Similar to how the U.S. has fallen behind in upgrading its rail infrastructure, so too have space companies failed to keep up with businesses in other industries born in this data-centric economy, he said. Facebook, which recently leveraged Big Data to construct population density maps, is one salient example.

But there are exceptions. DigitalGlobe, for one, has invested heavily into its analytical capabilities to make full use of its massive cache of Earth imagery. “We’re producing approximately 270 terabytes of data per day. That’s adding to a database now in the cloud that’s 100 petabytes … the equivalent of 100 million hours of video,” said Jeffrey Tarr, DigitalGlobe’s president and Chief Executive Officer (CEO). “This data is so massive that human beings don’t have the capacity to analyze or make sense of it.”

Consequently, DigitalGlobe has invested heavily over the last few years to open up this data to a growing ecosystem of partners, which in turn are helping transform DigitalGlobe from just a satellite operator into a wider “information business,” Tarr said.

The panelists agreed that companies as a whole must strive to democratize these large data streams for the benefit of the global economy. For DigitalGlobe, that means ensuring access to its data is as low-cost as possible, particularly for early stage startups, many of which are venture-backed. Tarr said that DigitalGlobe often shares its data based on its customers’ percentage of revenue, and he sees this as a net positive for the industry. “As they unlock their market opportunity, we all benefit,” he said.

Boshuizen said Planet has a similar objective in mind. “One of the founding principles was that data be accessible to everyone. It doesn’t have to be free, but it has to be available,” he said. To that end, the company has created an Application Programming Interface (API) around which anyone can build their own app. “Just like the Google Maps model, where you see Google Maps embedded in so many applications — we took a lesson from that,” he said.

Part of the reason the panelists stressed the democratization of data is because the industry needs as many companies as possible innovating new ways to leverage these data streams into actual value. For Lars Dyrud, CEO of OmniEarth, the current lack of applications is a significant limitation to growing Big Data businesses, particularly those focused on Earth Observation (EO). “The problem is there is not enough additional demand for all this stuff we’re putting into space. I think that the biggest hurdle right now is unlocking these applications,” he said.

To facilitate new capabilities, World View CEO Jane Poynter suggested that collaboration across businesses may be the best approach, and as such has oriented World View to capitalize on its partnerships with companies such as Ball Aerospace. “Our business model is founded in the notion of an ecosystem … I think a rising tide really does lift all boats,” she said.

As for the future, Poynter expects new data streams to continue to emerge. Although World View is one of the few observation companies operating in the upper atmosphere rather than in space, she thinks the field will quickly become more crowded. “In a few short years you are going to see that the stratospheric economy is going to be a major driver in this greater space and aerial economy,” she said.

These new data sources will add to what Tarr calls “a living digital inventory” of the planet. He believes that not too far into the future, humans will have near ubiquitous and continuous coverage of the Earth at a resolution that will improve our decision-making across all industries. “And that’s going to make the world a better place,” he said.