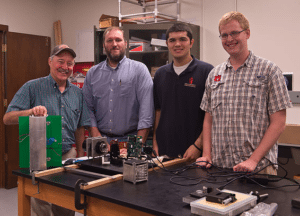 [Via Satellite 01-06-2016] Auburn University’s Small Satellite Program is looking to foster energy and growth in the small satellite sector. The program equips students from freshman up to graduate level to build, launch and operate cubesat programs, teaching them to manage the entire process.

The university currently has one satellite in orbit, AubieSat 1, launched in 2011, which successfully tested solar cell encapsulates on solar panels until about two years ago. Now, through a $1 million, four-year grant obtained in 2015 from the National Science Foundation (NSF), students are working to build two 6U satellites in collaboration with the University of Alabama in Huntsville. The satellites will determine the structure of terrestrial gamma ray flashes produced by thunderstorms, J.M. Wersinger, program director for AU’s Small Satellite Program told Via Satellite. For this project, between 40 and 50 AU students with guidance from advisors and faculty, are working to build the two satellites, which will capture gamma rays from different angles.

“The students do the work. For them, it’s a great way to learn about a project, how a project is run, the process from conception to operations, and going through all the phases of systems engineering. This is one of the most important things they learn because they can apply it to anything after that,” said Wersinger. “We focus a lot on the systems engineering process, mission definition and requirements as we move from project to mission requirements to system and subsystem requirements and components, etc. Designing these systems, testing and verification is done against requirements, which is an extremely important skill for these students to learn.”

Wersinger boasts that many of the students go on to have prosperous careers in the satellite industry, many take internships at NASA, one has gone on to have an internship with SpaceX and he tells of one student who had a job made specifically for him at the NASA Jet Propulsion Laboratory (JPL).

“We tend to get very motivated students who take ownership. Some exhibit leadership qualities on the get-go. They are driven by excitement … They are learning and developing skills that put them ahead of the majority of job seekers in engineering when they graduate,” Wersinger said.

Launching the spacecraft is possible through the NASA CubeSat Launch Initiative (CSLI), which provides free launches to education programs’ CubeSats. The first satellite, AubieSat 1, launched aboard a Delta 2 rocket as part of NASA’s ELANA 3 mission, which launched six cubesats in total from the Vandenburg Air Force Base in California. And while Wersinger is pleased with the grants the program has received, he is hoping to collect more to keep the program focused on research and development going forward.

“Until about two to three years ago we were mainly an educational program, but we have now transitioned to an R&D program. We developed cubesats with other people to carry their instruments be it science or technology,” said Wersinger.

Now, he’s hoping to move the program into the next step by adding a strong research dimension to the educational effort, much like Surrey Satellite Technology, which began as a university program and has moved to providing incubators for fledging space businesses.

“We are in the process of writing more proposals to insure continuity in the program,” said Wersinger, who said the university is working with the military to develop ideas and has recently submitted a proposal for a cubesat that can enable high-speed communications in space. “Our goal is to launch small satellites every other year in the near future.”

With the success of small satellites in the space sector, Wersinger is confident there will be more projects out there for AU students to benefit from going forward.

“Everyone understands that there is no more money at NASA to continue building monsters that take 15 years to complete and are very risk averse and often when the technology goes into space, it’s no longer current. Whereas, with cubesats you can go from an idea to something that is ready for space in about three years, which means the technology is current, and it’s not as risk averse because they are so much cheaper to build and launch,” said Wersinger.

“These cubesats are not expensive when compared to the large satellites, which cost into the hundreds of millions of dollars. This program goes to maybe $200,000 in terms of hardware,” he adds.