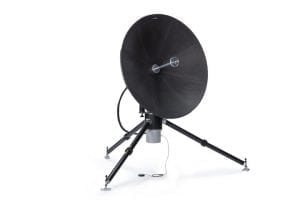 [Via Satellite 12-22-2016] DataPath has announced the launch of its new M series of ultra-portable satellite terminals. The series will include antennas in a range of reflector sizes up to 2 meters. DataPath will first introduce its commercial M90 and military MT90 satellite terminals, which are the lightest wideband Ka 90-cm antennas that comply with airline carry-on baggage size restrictions.

Highly mobile users such as special forces, newsgatherers, or first responders need communications systems that can move as quickly and easily as their operations do. The driving requirement guiding all aspects of the M series’ development was ultra-portability. The system can be easily stowed in small spaces ranging from an aircraft overhead compartment to a ship’s berth.

DataPath designed the M90 and MT90 to allow users to quickly change frequency bands. Like the company’s other Inmarsat Global Xpress and Wideband Global Satcom (WGS)-certified terminals, the new antennas were built to operate on a variety of satellite systems. The series of terminals will support military and commercial wideband Ka-, X- and Ku-band frequencies.

With prototypes complete, the M90 is in final phases of development and certification. DataPath expects to achieve full product availability in the first quarter of 2017, and the MT90 is also expected to complete WGS certification in the first half of the year. As an additional value-added feature, DataPath’s MaxView Enterprise network management and control software has been integrated into the M series.

Earlier this year, DataPath moved manufacturing of its newer portable terminal lines to its Atlanta-area headquarters facility, which is certified to the ISO 9001:2008 standard for the design, integration, customization, service and support of fixed, transportable, mobile, portable networks, and communication platforms. The M90 is DataPath’s first new satellite antenna product to be entirely designed and built in the U.S. facility since the move.