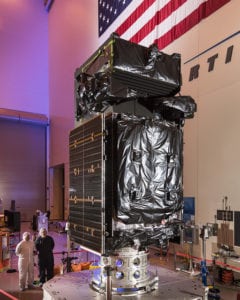 The next satellite in SBIRS the constellation, GEO Flight 3, will launch on Jan. 19 from Cape Canaveral, Florida. Photo: Lockheed Martin

[Via Satellite 12-07-2016] The U.S Air Force has signed off on Lockheed Martin‘s newly upgraded Space-Based Infrared System (SBIRS) ground system, enhancing the constellation’s ability to deliver infrared data that is critical to early missile warning and defense. The new SBIRS ground system serves as the nerve center for the satellite constellation, collecting large amounts of data from the satellites’ sensors and converting it into actionable reports for defense, intelligence and civil applications, Lockheed Martin said in a statement.

The new ground system is located at the SBIRS Mission Control Station at Buckley Air Force Base, Colorado, and replaces the existing ground segment, which has been in operation since 2001.

The acceptance comes shortly after a joint government and industry team closed their investigation into a potential parts issue of a failed component from another contractor’s satellite. The investigation team performed an assessment to determine if a similar failure could be applicable to the SBIRS GEO Flight-3 Satellite Liquid Apogee Engine (LAE). The results concluded the SBIRS engine has no hardware defect and is flightworthy.