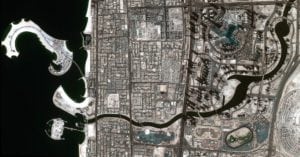 [Via Satellite 11-09-2016] DubaiSat 2, owned and operated by the Mohammed bin Rashid Space Center (MBRSC), has captured high-definition photos of the Dubai Water Canal full of water. The photos show the new waterway flowing from Dubai Creek down towards the Arabian Gulf. The images also showcase the various facilities built to run along both banks of the canal and the areas surrounding it, which consist of residences, hotels and recreational centers.

DubaiSat 2 provides high-quality satellite images to several institutions within the United Arab Emirates (UAE) and internationally, for urban planning and mapping, monitoring environmental changes and disaster management. The satellite’s camera features a 1-meter panchromatic resolution and a 4-meter multi-spectral resolution for colored images. It can store 512 images, each 12 km x 12 km in size.

The MBRSC launched DubaiSat 2 in 2013 via the Dnepr at Yasny Cosmodrome to circulate a sun-synchronous orbit, 600 km in altitude.