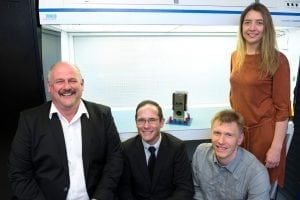 [Via Satellite 11-07-2016] SCS Aerospace Group will launch a nanosatellite designed and built in South Africa early next year from the International Space Station (ISS) as part of a European Commission research project.

As part of the European Commission’s QB50 project, the satellite will be launched from the space station during the first quarter of 2017 together with 40 satellites from other countries. With these satellites, the European Commission aims to conduct atmospheric research in the lower thermosphere between 200 km to 380 km altitude. The data collected from this experiment over a period of 18 months will be used to complement current atmospheric models used by operators in the space industry. Apart from conducting the European Commission’s lower thermosphere experiments, the nanosatellite, called nSight1, which weighs 2.5 kg, will also test the company’s newly developed SCS Gecko Imager as well as Nelson Mandela Metropolitan University‘s Radiation Mitigation VHDL Coding Technique during its six- to 18-month flight.

“Almost all the systems and components on this satellite were manufactured and assembled within six months with South African partners,” said Dr. Sias Mostert, chairman of the SCS Aerospace Group.

Although SCS Space is the prime contractor for the satellite, other participants in the project include the Space Advisory Company, Stellenbosch University, CubeSpace, Cape Peninsula University of Technology, Nelson Mandela Metropolitan University, Pinkmatter Solutions, the Amateur Radio Society and NewSpace Systems.