Clyde Space CEO: No Slowdown in CubeSat Demand on the Horizon 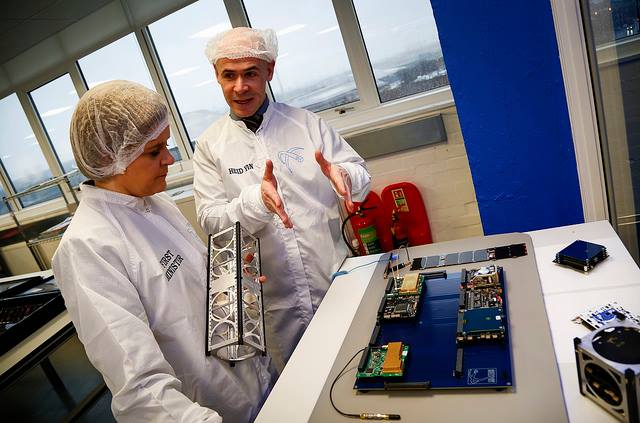 [Via Satellite 08-17-2016] Clyde Space CEO Craig Clark does not expect the SmallSat market to experience a major downturn anytime soon, anticipating instead that this sector will only continue to climb. As one of the first companies to start commercializing CubeSats roughly a decade ago, Clyde Space has grown to become one of the most prominent manufacturers of CubeSat and SmallSat systems. Clyde Space grew by 70 percent for fiscal year 2016, which the company just recently completed, continuing a pattern over the past three to four years of 30 to 70 percent annual growth, according to Clark. With investment in SmallSat going not only to manufacturing, but also to other parts of the sector such as launch and ground services, he said this trend appears set only to continue.

“Some people are saying there is going to be less investment. They think there is a bit of a bubble, but I don’t see it like that. I see the technology very aggressively moving forward,” Clark told Via Satellite, citing developments in commercial, academic, civil and military sectors. “I don’t see it slowing down. The challenge for a company like Clyde Space and others who operate in this area is whether or not companies can scale up fast enough to meet the demand and still maintain the quality and performance within the timeframes required by these customers.”

A long-time believer in the potential of CubeSats, Clark founded Clyde Space in 2005. He points to about three years ago as the tipping point for this part of the industry, which is now growing at a rapid clip. Clark said Clyde Space has been able to build a company focused on small satellite technology by achieving the right price points for products and deviating from traditional satellite manufacturing by producing standardized systems in high quantities rather than custom-built systems in low quantities. For example, he said the company has sold about 800 standardized power systems for CubeSats.

Clark said the goal for Clyde Space now is to be able to produce at a high enough rate to keep pace with demand.

“We’ve been investing in our manufacturing practices more than anything this year because that has been the major factor in being able to support this growing market,” he said.

Clark said Clyde Space has been building up facilities for satellite testing, such as thermal vacuum and vibration testing, and now has 12 identical integration stations. Through the company’s investment in increased scale, he said manufacturing and engineering are essentially bifurcating into two separate fields to keep pace with demand for existing products while also developing new ones.

[Tweet “Silicon Valley is great, but the main #smallsat impact will come from incumbent big companies…”]

“It used to be very integrated so you had engineering and manufacturing quite close. Now it’s more of our engineering developing new products or working on bespoke systems, and the manufacturing team producing standard products,” he explained.

“Three to four years ago when we talked to customers about communications systems for example, we would offer 1 to 2 Mbps downlink and they thought, ‘oh that’s fantastic.’ One to two years since, customers come to us and say they want 40 Mbps downlink, and they expect it. In another two to three years it’s going to be gigabits per second because they want laser-comm. There is an exponential change in data transfer, data handling, onboard power management, onboard power generation and attitude control. All different sensors are being developed and that’s enabling more applications,” he added.

Clark said Clyde Space has had discussions with large companies that are interested in using small satellites to get applications into orbit much faster than the timelines often associated with larger, typically geostationary, satellites. While much of the focus today is on startups leveraging small satellites for new business ideas, Clark said he expects it is incumbent players that could very well have the largest impact in the future.

“I think the biggest impact is going to be not from the new companies that are raising finance but the existing, more established service companies that operate already servicing [Business to Consumer] B2C. Those guys have the understanding of space and the money. They are used to running spacecraft projects on a large scale and selecting capable suppliers for that. I think once they get their interest to a point of buying constellations of CubeSats, then that will have the biggest impact on the CubeSat and small satellite market. Silicon Valley is great, but I think the main impact is going to come from these big companies that already exist,” he said.

About 40 percent of Clyde Space’s business is in the United States. The U.K. also comprises a lot of customers as well, significantly eclipsing business that comes from the rest of Europe. Clark said other business is coming from places like Malaysia, Singapore and Australia, South Africa, some parts of South America and particularly Japan. He said the company intends to have more staff in the U.S. for customers there in the near future.

Currently, Clyde Space builds about six satellites a month. Clark said his dream is to build tens of satellites monthly in the future. This production rate is part of the company’s product strategy as it retools its manufacturing and engineering approach for rising demand.

“We are developing new products to enable us to essentially have a satellite sitting on the shelf, ready to have a payload integrated with it. That’s where we are taking the company in the next two to three years with our current development projects,” he said.