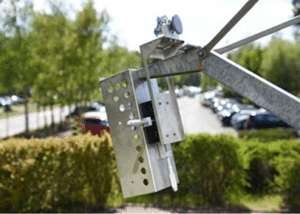 [Via Satellite 07-22-2016] Integrated Satellite Applications Technologies (iSat) is making progress on developing new satellite tracking feed equipment for inclined and Ka-band satellites based on a contract from the European Space Agency (ESA) the company received in January.

ESA awarded the contract to develop a feed adjustment mechanism with both manual and motorized operation to provide improved alignment of Ka-band VSAT antennas and tracking of inclined-orbit satellites up to about ±3 degrees in C-, X- and Ku-band. According to iSat, the system significantly reduces the capital cost of entry to use inclined capacity, which typically costs around 50 percent that of capacity in Geostationary Earth Orbit (GEO).

iSat conducted tests of the inclined tracking motorized feed using a 1.8-meter offset antenna at Ku-band (11.45 GHz) monitoring the beacon on SES’ NSS 7, which is operating in a 1 degree inclined orbit, from iSat’s Cody Technology Park, Farnborough facility. The beacon power level signal received stayed within a range of 0.5dB.

According to iSat, without tracking, the beacon power level could expect to change by more than 20dB for a 1-degree miss-point. The company is continuing to work on a non-intervention remote end system.