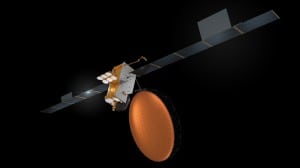 [Via Satellite 07-12-2016] Kongsberg Norspace, the Norway-based subsidiary of Kongsberg Defence and Aerospace, has won a contract with Airbus Defence and Space to provide highly integrated L-band pre- and post-processors for the first two Inmarsat 6 satellites. The contract covers development and delivery of flight hardware with a value of $29.7 to $35.6 million (250 to 300 million Norwegian krone). The European Space Agency (ESA) is supporting the program through its Advanced Research in Telecommunications Systems (ARTES) 3-4 program.

Inmarsat awarded Airbus Defence and Space a contract to build the first two mobile communications satellites for the operator’s sixth-generation fleet in December 2015. The spacecraft contain the manufacturer’s new generation modular digital processor, capable of full routing flexibility over up to 8,000 channels and dynamic power allocation to more than 200 spot beams in L-band, in addition to a Ka-band co-payload. The Surface Acoustic Wave filters (SAW)-based L-band processors from Kongsberg will provide the phase coherent down and up-conversion from L-band to the digital processor.