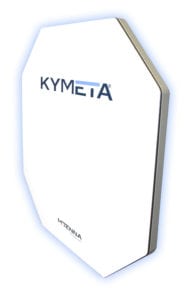 [Via Satellite 06-17-2016] Kymeta plans to release the first commercial units of its meta-materials technology based mTenna in 2017. The software-defined electronically steered antenna is anticipated to open new markets for satellite connectivity and broaden those where satellite has a presence today.

The mTenna has evolved over the course of its development, delaying introduction but creating a product Kymeta executives believe will be significantly more capable than the originally conceived version. These changes include a transition last year from a rectilinear design, but has now shifted to a cylindrical one — an architecture the company described as making the antenna “work exponentially better” than the 2014 iteration. The mTenna development kits last year were based on Printed Circuit Board (PCB) technology, but in an interview with Via Satellite, Kymeta President and CEO Nathan Kundtz said the company shifted to building the antennas based on Thin-Film-Transistor (TFT) technology used for Liquid Crystal Displays (LCDs).

Because the mTenna’s active layer is similar to an LCD screen, Kymeta is using television manufacturer Sharp’s TFT production lines to produce the antennas. Kundtz said Kymeta started building mTennas with Sharp around the end of last year.

“We are in the middle of productizing that technology,” said Kundtz. “We have gone through two alpha spins, we will go through two more beta spins this year, and intend to release to pilot manufacturing in December of this year. We will have limited availability early in 2017.”

The first commercial version of the mTenna will measure 70cm and support Ku-band communications. Kymeta shipped Sharp-produced alpha versions of the product to partners and customers last year. Its first debut took place at the Detroit Auto Show, followed by an Intelsat-supported connected car drive to the SATELLITE 2016 Conference and Exhibition in March. Kymeta tested the antenna through more than 20,000 miles of driving on a Toyota 4Runner, and also completed a demo on a yacht.

Kundtz said he anticipates Kymeta will be the first company to offer a commercially viable electronically scanned flat panel antenna devoid of any moving parts. At the same time, he expects the growing number of phased array antennas soon to enter the market will not be able to reach Kymeta in terms of price and capability.

[Tweet “Kymeta expects to be 1st to market w/electronically scanned antenna, says others won’t catch up”]

“The only other contenders I’m aware of doing electronically scanned antennas are using more or less conventional phased array approaches. They are trying to make the phase shifters less expensive. At the same time, they are not addressing the core issues with that architecture, in particular issues with the power consumption. In addition, what makes those systems expensive is the cost of the full module and the buildup of the full system. As far as I know, we are the only ones to do closed loop tracking on the antenna and have a complete system to which a Block UpConverter (BUC), Low Noise Block downconverter (LNB) and modem can be added to form a full mobile solution,” he explained.

He added that Kymeta is the only company to have completed transmit and receive using one aperture. Phased arrays require two antennas, he said, resulting in the need to decide between tradeoffs of additional cost, size, weight and power consumption. Regarding throughput, Kundtz said this depends more on the space segment than the antenna, which can get tens of Mbps through a single aperture with Intelsat’s EpicNG High Throughput Satellites (HTS). He said antennas can be combined in a scalable manner to reach desired throughputs.

The connected car, specifically, Kundtz describes as an entirely new market for satellite. He said that automotive Original Equipment Manufacturers (OEMs) are “highly incentivized” to leverage satellite connectivity even over cellular networks.

“A lot of the data that needs to be pushed to the car looks more like sending television signals,” he said. “You are sending the same data to lots of people, and people don’t broadcast television over cellular. They use satellite for that, or cable, and you can’t use cable to the car. So satellite has a huge economic advantage to anything where you are going to multicast or broadcast, which is what a lot of the data services look like to the car, whether that is software updates, entertainment, or high density mapping that will be required not only now but for autonomous vehicles in the future.”

Satellite’s ability to multicast also brings about a cybersecurity benefit, he said.

“From a security perspective, when you have a large unicast presence like a cellular network, every single node on that network is a potential threat,” he added. “It’s a potential vector that can be hacked. So for those elements that are most sensitive, when you are providing safety-critical software updates, being in an environment where the physical signal is something that can be controlled by teleport is a tremendous advantage.”

Kymeta has multiple partnerships to bring the mTenna to different markets. For maritime, the company is partnered with Panasonic Avionics and Intellian; for aviation, Honeywell and Inmarsat; and for land mobile, UIEvolution, Intelsat and Toyota. Kundtz said he expects the antenna, thanks to its small size and ease of installation, among other details, will enable connectivity on fishing vessels, pleasure-craft and a wider range of aircraft. In land mobile, he said the antenna should open up rail transportation. Kymeta is also pursuing opportunities with the Internet of Things (IoT), oil and gas, agriculture, and Non-Geosynchronous (NGSO) satellite communications.