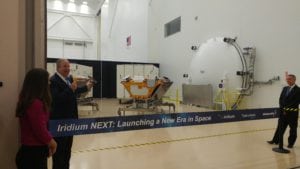 [Via Satellite 06-15-2016] With the first launch for Iridium Next now scheduled with SpaceX for September 12, Iridium’s satellite manufacturing partners are preparing to engage in production of the company’s second generation fleet at a rate of one full satellite per week. The $3 billion satellite program, previously delayed by both manufacturing and launch issues, currently remains on track for completion by the end of 2017 as formerly anticipated.

Iridium Next prime contractor Thales Alenia Space delayed the constellation in 2015 to allow for additional testing time, and during that extended testing, SpaceX’s launch schedule experienced an interruption after its CRS-7 mission for NASA failed. Now Iridium is confident the satellites are ready to go and that once SpaceX completes its first of seven Next launches from Vandenberg Air Force Base in California, it will set in motion the full constellation refresh.

“While the program has had some delays, it’s a huge complex program,” Matt Desch, CEO of Iridium, said at a June 14 press conference. “It’s really come together over the last six months or so.”

Iridium Next is the largest commercial satellite program to date for both Thales Alenia Space and Orbital ATK, according to Bertrand Maureau, EVP of telecommunication at Thales Alenia Space, and Frank Culbertson, president of Orbital ATK’s Space Systems Group, respectively. Forty subcontractors in total are working on Iridium Next, and another 30 engineers are planned to join the manufacturing team in order to reach a production cadence of roughly five satellites a month.

Desch said the first batch of satellites will be completed by July and ready to go by August. The reason the satellites are not launching until September is because Vandenberg has been closed for some time, and once opened, there is a backlog of commercial and government missions ahead of Iridium Next.

“It is a little later than I hoped to be honest with you, but there are a number of non-SpaceX launches planned in August and early September at Vandenberg, so that is the earliest they could give us for this launch,” explained Desch. “SpaceX is ready, the rocket is ready, the dispensers are ready — so that’s not the issue. The issue is the fact that the range has been closed for a while. Vandenberg is unusually busy in those two months.”

He added that Iridium does have an advantage by using Vandenberg as its launch site because the company is on a separate queue for SpaceX compared to missions at Cape Canaveral. Desch said Iridium, which is SpaceX’s largest commercial customer, will be a priority for the launch provider at Vandenberg. He also praised SpaceX for the company’s efforts with reusability, but said Iridium will be using all new Falcon 9s for its fleet deployment.

Iridium originally planned to launch its first two Iridium Next satellites with Kosmotras aboard a Dnepr rocket, but that mission has since been sidelined. A joint venture between Russia and Ukraine, Russia’s Ministry of Defense has yet to approve of the mission.

“That’s been a challenge,” Desch admitted. “The Russians still have not given us a plan for launching those two satellites. They are ostensibly still at the end of the program right now, though not a lot of movement has happened.”

Desch said the Iridium Next network requires 66 satellites, which will be distributed into six planes of 11 satellites. Each plane is supposed to have a spare, but with the current SpaceX missions, only four will. With Iridium’s confidence waning in Kosmotras, Desch said the company is evaluating other options.

“I’m still hopeful that they will work that out and give us a launch that we can get to, but if not there are plans under works. We will be talking about those over time,” he said.

Iridium Next is an important upgrade for Iridium not only because of its significantly increased capabilities, but also because its existing constellation of 66 satellites is out of spares. The company’s current Block 1 constellation, built by Lockheed Martin, had a design life of six to seven years. The satellites have lasted roughly three times that. The long awaited launch and network transfer to Iridium Next is expected to take about 18 months, according to Desch.

Desch said that, as the Iridium Next satellites are launched, the company’s Network Operations Center (NOC) in Leesburg, Virginia will direct them into orbital positions near existing satellites. From there, engineers will test the new spacecraft before instantaneously switching the links from the old satellites to the new.

Iridium Next satellites have a mass of 860 kilograms and use Ka-band inter-satellite links to connect with other nearby Next spacecraft. The satellites provide L-band services with up to 1.4 Mbps through Iridium Certus. Iridium Next also carries Aireon’s hosted payloads for space-based Automatic Dependent Surveillance-Broadcast (ADS-B) flight tracking, and exactEarth’s hosted payloads for Automatic Identification System (AIS) ship-tracking. The satellites will use quasi-polar orbits at 780 kilometers above Earth.

The Iridium Next satellites are designed for backwards compatibility with the Block 1 fleet, but Desch said the old fleet will only be used temporarily as a backup before the company intentionally deorbits it.

“We want to be able to take them out of space in a responsible way,” said Desch. “As we are comfortable that these [new] satellites are operating as they are designed — and we are confident that that will happen quickly — we’ll start moving those [Block 1] satellites and commanding those satellites to expend all their remaining fuel and they will be deorbited. They will literally slow themselves down to the extent that they catch in the atmosphere. Most will come down within months.”

Desch said Iridium invested roughly $100 million into a modernized ground system for Iridium Next, which included new antennas and gateway upgrades. He said those changes have been in place since the beginning of the year to avoid introducing anything new this close to launch. Desch described positioning the new satellites as a “highly scripted dance.” He estimated the first batch of satellites launched will undergo about three months of testing, after which future launches would commence at about 60 day intervals.