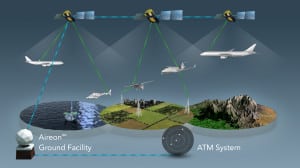 [Via Satellite 06-02-2016] Harris Corp. has finished production on all Automatic Dependent Surveillance-Broadcast (ADS-B) 1090 Extended Squitter (ES) receiver payloads that will enable Aireon’s satellite-based air traffic surveillance service. The 81 ADS-B payloads were completed ahead of schedule and represent the largest implementation of a hosted payload solution, according to a statement released by Harris.

Completion of these payloads represents another step toward deploying Aireon’s space-based ADS-B service and enabling real-time air traffic surveillance. Aireon is incorporating the payloads into the Iridium Next satellites, where they will operate as an independent global air traffic surveillance system. Each payload is designed to receive ADS-B messages containing position, speed and heading from aircraft and stream them to Aireon’s operations center, which will then distribute the information to Air Navigation Service Providers (ANSPs) and other customers.

In addition to assembly, Harris performed successful space qualification testing to confirm the payloads will withstand the harsh environment of space, while also ensuring their ability to adapt to evolving air traffic patterns during the course of their lifespan.