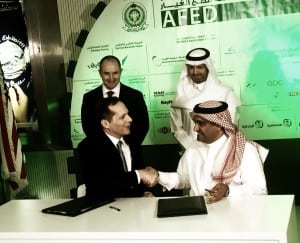 [Via Satellite 02-22-2016] DigitalGlobe has formed a joint venture with TAQNIA, a firm dedicated to accelerating technology development for the Kingdom of Saudi Arabia, in partnership with King Abdulaziz City for Science and Technology (KACST), to develop a constellation of highly capable small imaging satellites to support the needs of customers around the world. The joint venture will be responsible for developing six or more sub-meter resolution imaging satellites.

TAQNIA and KACST will benefit from DigitalGlobe’s imagery production platform and catalog of high-resolution, high-accuracy imagery, which will improve the native accuracy of the small satellite imagery. TAQNIA and KACST will also benefit from DigitalGlobe’s global distribution capability and existing customer relationships with worldwide buyers of commercial satellite imagery and geospatial information.