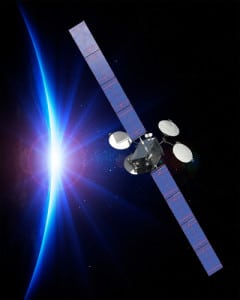 [Via Satellite 09-10-2015] The all-electric satellite ABS 3A, built by Boeing for Asia Broadcast Satellite (ABS), is operational following an on-orbit handover on Aug. 31. The satellite, based on the Boeing 702 Small Platform (SP), launched on March 1 with Eutelsat 115 West B aboard a SpaceX Falcon 9 rocket.

“With a successful launch, testing and execution of orbit operations, we were able to deliver the first 702SP to ABS about one month earlier than planned,” said Mark Spiwak, president of Boeing Satellite Systems International.

ABS 3A expands the operator’s communications services in the Americas, Europe, the Middle East and Africa. The satellite contains a sufficient quantity of the inert, non-hazardous element xenon to extend operations beyond the expected spacecraft design life of 15 years.

“The operational ABS 3A satellite and ABS 2A, launching in early 2016, will further strengthen and solidify our global expansion and offer flexible capacity to our growing fleet,” said Tom Choi, CEO of ABS.

Boeing is building ABS 2A as well, and received an order for a third all-electric 702SP satellite from ABS in June, but the order has been jeopardized by the lapse of Ex-Im bank’s authorization.