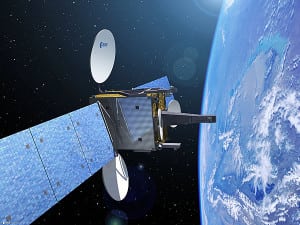 [Via Satellite 08-14-2015] German spacecraft manufacturer OHB Systems AG is taking fledgling steps toward greater prominence in building geostationary satellites. Hispasat AG1, the first satellite based on its SmallGEO platform, which was created through a Public-Private Partnership (PPP) with the European Space Agency (ESA), is nearing a long anticipated launch, having completed integration in February this year.

Marco Fuchs, CEO of OHB told Via Satellite the Hispasat AG1 satellite has been a learning experience for the company as it enters the market for spacecraft that reside in Geostationary Earth Orbit (GEO).

“What is clear to us is that it is a very dynamic market in commercial telecom. We are following a path where we do have some follow up contracts that are not completely commercial in the sense that we are building the GEO platforms of the Meteosat Third Generation (MTG) program for the European weather organization (EUMETSAT) together with ESA. We are also working on GEO satellites for the [Heinrich Hertz study with the] German space agency (DLR). The GEO world is a new world for us but we believe as a satellite systems company we have to be also in that segment.”

OHB is evolving as a company, having committed to merging its space division with Erwin Kayser-Threde, which it purchased several years ago. Fuchs said the company is moving activities from two locations into one at Oberpfaffenhofen in the vicinity of Munich, Germany. The DLR’s Oberpfaffenhofen site is one of Germany’s largest research centers, making it an idea location.

Though the GEO market is a new market OHB felt it imperative to enter, Fuchs said he does not expect this to prompt a shift away from the company’s core market, which consists predominantly of institutional missions for European space programs. For future GEO projects, Fuchs said a similar model to Hispasat AG1 would be preferred.

“In that setup we are going to be successful. The Hispasat AG1 satellite is co-funded as a PPP between ESA and Hispasat. We have two customers there, and that scenario is quite promising, but we are not naïve to thinking that, after the first satellite, we will immediately be able to be present everywhere. That’s not going to happen, so we have to work on our niche strategy and that is what we are doing,” he said.

Hispasat AG1 has a dry mass of 1,700 kg and a launch mas of 3.2 tons. Arianespace is scheduled to launch the satellite in 2015. However, while small satellites are a growing trend, in GEO this is less the case.

“GEO satellites have been trending larger,” Phil Smith, senior space analyst, Tauri Group, told Via Satellite. “This is driven by larger power requirements, larger antenna arrays, larger payloads, and related hardware. However, this trend has also motivated efforts to find ways to increase efficiencies and reduce mass. Electric propulsion is an example of this. Other examples include more efficient solar arrays and reconfigurable transponders.”

Unique to the Hispasat AG1 is a regenerative Redsat payload anticipated to increase transmission capacity while concurrently lowering the cost of communications by enabling Hispasat to use the satellite’s power in a more agile and efficient manner. Greater flexibility is a more regular demand from satellite operators, which desire to stay more nimble in space than in the past. OHB is closely watching these trends and looking at ways to implement them on future spacecraft.

“A big trend that we are now following as well is electric propulsion for GEO satellites. For commercial applications [this] is now something that we find very interesting. As with everyone else, we have to get the prices down. At the end of the day the prices of satellites and of assets in space have to be optimized,” said Fuchs.

Electric propulsion has made greater strides today with commercial operators beginning to leverage the technology. Satellites using electric propulsion free up the space usually allocated for fuel, enabling either lighter spacecraft for a potentially lower launch cost, or more room for payloads. Smith noted that NASA’s investigation of electric propulsion for use in cargo missions to cis-lunar space and Mars could eventually inform similar commercial services. The space agency has had a lengthy history with electric propulsion, being the first to employ it as a primary propulsion system on Deep Space 1 (DS1) in 1998.

OHB’s other major focus on the spacecraft side of its business is standardizing the industrialization of satellites. Though spacecraft buses have contributed to regular formats, differences in payloads and missions create unique requirements. Fuchs said OHB has learned new methods through Europe’s Global Navigation Satellite Services (GNSS) Galileo constellation, for which the company has a contract to build 22 satellites. Introducing more standardization to streamline manufacturing will take a different mindset than in the past, he said.

“That’s going to require a modular approach where you have elements that are identical, and build around those core elements flexibility. This is, I think, what really is changing over the past year, that there will be a lot of flexibility in the payload. Also intelligence will be more in software than in hardware, so that’s the challenge and the whole industry is having the same challenges in that aspect. But clearly the trend is obvious that we and everybody who is in the satellite industry needs to be more industrialized” he said.

The next two Galileo satellites are scheduled to launch in September aboard an Arianespace Soyuz rocket. Another Galileo launch is scheduled for December. Fuchs said there is positive energy coming into the satellite industry from the burgeoning SmallSat sector. He described the SmallSat mentality as very different from typical institutional customers. This is an area OHB is also watching with interest. SmallSats could further the company’s push toward greater regularity in satellite production.

“Clearly this is good news because, first of all, it is new markets and new opportunities. Second, I think the requirements stated are helping to go in that direction of industrialization and standardization. There is also a different view of risk taking,” he said. “What we now witness in the U.S., I see that also coming over to Europe. At least now it is having an impact on the mindset, on how people look at space and the interest in the space industry is much bigger than it used to be around 10 years ago.”