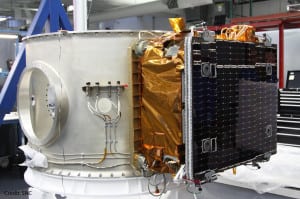 An OG2 Satellite attached to an ESPA ring prior to launch. Photo: SNC

[Via Satellite 08-07-2015] Orbcomm achieved record high revenues during its second quarter earnings increasing 85 percent year over year (YoY) despite losing one of its first six Orbcomm Second Generation (OG2) satellites. The satellite Machine-to-Machine (M2M) communications company reported $44.9 million in revenue, with service revenues up 61 percent YoY and product sales 122 percent higher than in 2014. This growth went unhindered by the loss of Orbcomm’s L1 satellite, which ceased communicating earlier this summer.

Orbcomm is still trying to recover the spacecraft with the help of prime contractor Sierra Nevada Corporation (SNC) and payload designer Boeing, but recorded an impairment charge of $12.7 million to write-off the net book value of this satellite as of June 30, because of the extended period without communication. Leading up to the loss of contact, the company said the satellite experienced two short outages.

Marc Eisenberg, CEO of Orbcomm said Aug. 8 during an earnings conference call that the loss of the satellite is not expected to impede the company’s surge in business. He confirmed that no other OG2 satellites are exhibiting similar issues, leading the company to believe the problem is likely a workmanship or component issue, specific to this one satellite.

“The way we get our reliability is by putting up lots of spacecraft, and that’s what we’ve done here. The statistics are falling similar to most [Low Earth Orbit] LEO networks. While we certainly don’t like to lose satellites, we don’t see any real difference in the overall network performance and we are not anticipating any change in revenues,” he said.

Orbcomm lost five of its first 35 satellites in the original OG1 constellation during the first three years. The remaining satellites all lived for at least 10 years, and Eisenberg said 24 remain in the operator’s network today. Nonetheless, Orbcomm decided to bulk up its insurance policy, though Eisenberg added this step was underway before the anomaly.

“Under the terms of our in orbit insurance program, this satellite would have been the first of our three-satellite deductible across launch one and two. We also paid the new one-year in-orbit policy extending coverage to 2016 for the remaining five in-orbit OG2 satellites, with a one-satellite deductible. There are now two separate in-orbit insurance programs covering the OG2 satellite constellation,” said Robert Costantini, chief financial officer of Orbcomm.

The remaining 11 OG2 satellites are scheduled to launch later this year aboard a SpaceX Falcon 9 rocket. Despite the loss of a rocket and its Dragon payload June 28 during a NASA Commercial Resupply Services (CRS) mission, SpaceX has committed to completing all launches on its 2015 manifest by year’s end. Eisenberg said SpaceX is targeting a launch that could happen by mid-November. He added that SNC has completed factory acceptance testing for the remainder of the constellation.

Part of Orbcomm’s confidence in its constellation comes from the ability to further improve the capability of the network. Eisenberg said the company already made some recent updates focusing on efficiency and reliability, and will continue to optimize the system.

“The first improvement is adding the ability to utilize multiple downlinks on the OG2 satellites, increasing the overall system capacity of the network, and allowing our customers to send more messages. The second improvement enables our customers to utilize autonomous message store and forward capabilities, which simplifies modem development and programing for customers in regions that are not covered by gateway Earth stations. We will continue to make additional improvements including higher data rates and improved link margin services, which will enable our customers to send larger messages and utilize smaller antennas,” he said.

Orbcomm gained 35,000 net subscriber communicator additions during Q2, bringing its total number to just less than 1.3 million as of June 30. This number grew YoY by 42 percent. Eisenberg said much of the company’s growth stemmed from new product introductions and large deployments to key customers in transportation. Automatic Identification System (AIS) revenue is contributing as well. Eisenberg said Orbcomm is fulfilling large deployments for customers such as Hub and Doosan, and is pursuing and has bids for anything from five units to 150,000.

“Overall we are pursuing more opportunities across our business on more deals than anytime in our history,” he said.

Furthermore, Orbcomm signed a deal with a large transportation Original Equipment Manufacturer (OEM) to provide a customized global telematics platform for refrigeration units. The company expects to start deploying in North America during the first quarter of 2016, with other regions to follow.

“This new OEM could be really substantial. It should be in a couple years the biggest customer that we have,” added Eisenberg.

Orbcomm also noted a positive impact from the acquisitions of SkyWave and InSync earlier this year. The company is moving the bulk of SkyWave’s IsatData Pro (IDP) production to Mexico, which Eisenberg said is expected to bring about cost savings and operational efficiencies. Orbcomm also received authorization to begin testing production integration for a new modem on close partner Inmarsat’s L-band satellite network. Eisenberg said the device has the same footprint, programming and power environment as for OG2, enabling customers to choose between the appropriate network, with one development cycle and one stream of data. The company is also making headway on a Radio Frequency Integrated Circuit (RFIC) that would enable the company to reduce the surface area across all iSat-enabled products by more than 60 percent.