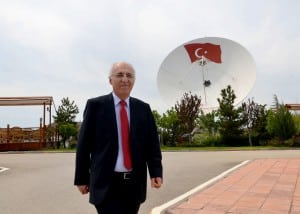 [Via Satellite 06-24-2014] Turkish satellite operator Turksat is gearing up to issue two Request for Proposals (RFPs) for new satellites. The company presold most of the capacity on its latest satellite, Turksat 4A, prior to its February 2014 launch aboard an International Launch Services (ILS) Proton rocket. The already completed Turksat 4B is awaiting a Proton launch after Inmarsat’s third Global Xpress satellite.

President and CEO of Turksat Ensar Gul told Via Satellite the company desires to increase the amount of capacity at its 42 degrees east orbital location, where the current fill rate is 96 percent.

“Turksat is preparing RFPs for two new satellites, namely as Turksat 5A and Turksat 5B. Both satellites are planned to be launched in 2018 to its 31 and 42 degrees east orbital slots. The first telecommunication satellite of Turkey, Turksat 6A is planned to launch in 2020,” said Gul.

Turksat’s satellites reach 118 countries, covering roughly three billion people, according to Gul. The operator is very strong in its domestic market, where Gul said 96 percent of broadcast satellite dishes are pointed to its satellites.

Turksat’s near-term goal is to operate a minimum of six satellites, extending the capacity at 42 degrees east and creating new hot locations for other countries at orbital slots at 31 and 50 degrees east. The operator’s pending satellite, Turksat 4B, is for the 50 degree orbital slot. Mitsubishi Electric built both the Turksat 4A and 4B satellites. Turksat 6A will carry 16 Broadcast Satellite Service (BSS)-band transponders and, once located at the 42 degrees east orbital slot, would cover all of Turkey, Asia and Europe. The satellite will also be built in Turkey.

“Turksat 6A will be the first domestically manufactured geostationary communications satellite,” Gul said. “The financial budget for this program is 546 MTL ( about $200 million) which will be shared by three parties; Turksat, Turkish Ministry of Transportation Communication and Maritime Affairs and Scientific and Technology Research Council of Turkey (Tubitak). The satellite will be manufactured under the leadership of Turksat and in cooperation with Space Technologies Research Institute of Tubitak (Tubitak Uzay), Turkish Aerospace Industries (TAI), Aselsan and CTech.”

New satellites will also help Turksat expand into new markets. The operator has TV uplink headend stations in Germany and in the Turkish Republic of Northern Cyprus today, and has plans to install new headend stations in countries where it aims to develop the Direct-to-Home (DTH) broadcast market.

Ultra-HD is also on the horizon. Gul said Turksat began TRT-4K Ultra-HD broadcasting with High Efficiency Video Coding (HEVC) in February 2015. He highlighted regional television sales as the reason for his confidence in Ultra-HD’s eventual popularity.

“Over 200,000 4K equipped televisions have been sold in Turkey as of June 2015. We expect the 4K TV’s to be 60 to 70 percent of total TV sales. This demand from the customer side hopefully will bring new 4K channels,” he added.

Another of Turksat’s goals is to reduce the digital divide in Turkey. Gul said the company provides services with 6,000 VSAT terminals, mainly to schools and government organizations. The operator anticipates growing these services further when Turksat 4B is launched, which will carry the company’s first Ka-band payload.