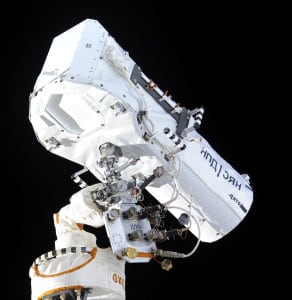 [Via Satellite 06-22-2015] UrtheCast has teamed up with SSTL and Elecnor Deimos Space to build and launch a constellation of multispectral optical and Synthetic Aperture Radar (SAR) satellites. The constellation is expected to comprise a minimum of 16 satellites — eight optical and eight SAR — flying in two orbital planes, with each plane consisting of four satellite pairs, equally-spaced around the orbit plane. Each pair of satellites will consist of a dual-mode, high-resolution optical satellite (video and pushbroom) and a dual-band high-resolution SAR satellite (X-band and L-band) flying in tandem.

SSTL will design and manufacture the satellite platforms as well as the high-resolution optical imagers. UrtheCast previously placed a contract with SSTL for an optical imager for the International Space Station (ISS). Elecnor Deimos Space is the company’s strategic implementation partner for building out the mission planning system, distributed ground stations, SAR payload integration, mission analysis and flight dynamics of the constellation.

UrtheCast has entered into Memoranda of Understanding (MOU’s) with multiple customers and partners, including an MOU from a confidential customer to provide $195 million of funding for the constellation during the build phase of the program, which is planned from 2016 to 2020. As these MOU’s are successfully converted to binding definitive agreements, UrtheCast anticipates these customers will provide further support and funding for the constellation.