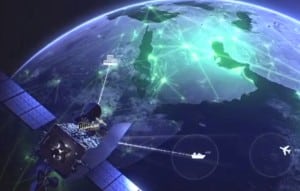 [Via Satellite 06-16-2015] Honeywell Aerospace and Inmarsat have completed the first phase of hardware and satellite network flight tests for GX Aviation broadband services, which they promise can deliver in-flight wireless connectivity similar to what is available at home or in the office. The JetWave-branded hardware enables airplanes to connect to Inmarsat’s Global Xpress satellite constellation for GX Aviation global Ka-band in-flight Wi-Fi services.

The tests, which included streaming YouTube videos and live radio, online conference calls, downloading files and more, were conducted in the United Kingdom this month to validate GX Aviation’s ability to deliver high-speed Wi-Fi connectivity while over land and water. The tests demonstrated a successful connection between the JetWave hardware and Inmarsat’s first Global Xpress satellite, I-5 F1, which powers GX Aviation services for Europe, the Middle East, Africa and Asia. This follows the ground-based high-speed and performance tests completed in March 2015.

“These flight tests are an exciting step toward the launch of GX Aviation and bringing a true broadband experience to the market. With GX Aviation, airlines and their passengers can finally experience a connectivity service equivalent to what they are used to on the ground,” said Inmarsat Aviation President Leo Mondale. “Just having Wi-Fi on board is no longer a differentiator — in the future it will be about the quality of the service.”