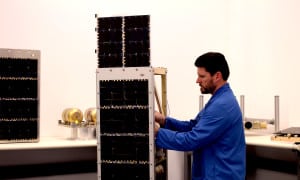 [Via Satellite 06-16-2015] BlackSky Global, a rising Seattle-based satellite imagery startup founded in 2013, plans to launch a constellation of 60 Earth observation satellites to enable revisit times of a few hours or less. The company has already raised capital to fully fund its first six spacecraft, which are planned for launch in 2016 and will pave the way for the rest of the fleet.

By 2019, BlackSky Global aims to have its full constellation in orbit, providing 1-meter resolution color imagery of the planet to a myriad of different customers. The satellites would be able to provide video as well at a speed of one frame per second, and the company is also planning to offer premium services. BlackSky Global has satellite imagery providers and data analytics companies as customers today, and uses a pay-per-picture business model for service from its satellites.

“BlackSky is really about providing satellite imagery as a service just like we’ve become accustomed to satellite communications as a service,” Peter Wegner, chief technology officer at BlackSky Global and former director of the U.S. Air Force Operationally Responsive Space Office, told Via Satellite. “There are a number of companies out there that lease satellite transponder time, and we are essentially doing the same thing — we are just capitalizing the constellation and we’ll lease out to our customers the telescopes on the systems.”

Wegner described BlackSky Global’s early satellite strategy as a balance between starting with enough satellites to validate the technology and making the best use of existing funding. The first two satellites are primarily for experiments, and though some customer have shown interest in doing studies with them, Wegner said they are not commercial imaging systems. Pathfinder 1 and Pathfinder 2 will influence the next four satellites, which will be commercial in application. Wegner said the company reached the number 60 for the size of the constellation because of the revisit time it would enable.

Each BlackSky Global satellite has a mass of 50 kilograms and is about the size of a mini-fridge. The company contracted a division of Spaceflight Industries known as Spaceflight Systems, which was formerly Andrews Space, to build the satellites. Similarly, Spaceflight Services is facilitating launches and Spaceflight Networks is one of the main third-party partners for ground stations.

BlackSky Global’s satellites are designed for a three-year mission life at a fairly low altitude of 450 kilometers. The spacecraft will include propulsion systems to reach this service life at such an orbit. Wegner said the satellites are designed with pre-planned obsolescence in mind, as the lifespan of each spacecraft offers enough time to provide services and then rapidly refresh with new technology.

“That’s really a sweet spot for us because we want to be able to upgrade this constellation over time with the latest technologies that are coming out of the electronics sector and with imaging updates to the system. That gives us a natural path. We can keep the satellite costs pretty low by using single-string redundancy in most of the systems,” explained Wegner.

“What we are doing is putting our satellites in orbits that are inclined at lower inclinations with the Earth between 40 and 55 degrees. At those orbits the satellite comes over a spot multiple times a day but never revisits at the same time. The benefit is that it gives you a number of passes; in some cases six passes a day,” he said.

BlackSky Global is targeting customers in markets such as agriculture, forestry, government, finance, energy and more. Wegner said other satellite imagery providers could also be potential customers that could purchase “pixel capacity” by leasing time on the company’s satellites. BlackSky is also creating a Web-scale software platform for customers to request, receive and interact with its satellite imagery online.

Wegner said BlackSky Global has put a considerable amount of thought into the number of satellites it needs, and that this number could rise based on the level of demand.

“We are base-lining 60 in all of the analysis that we are doing. At the end of the day the number could be significantly more than that. It’s really going to be based on the amount of demand that’s out there for satellite imagery as a service,” he said.