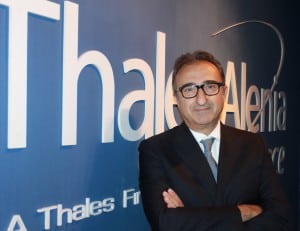 [Via Satellite 06-08-2015] The board of directors of Thales Alenia Space Italia has appointed Donato Amoroso as Chief Executive Officer (CEO) of the company. Amoroso succeeds Elisio Giacomo Prette, who led the company since 2013. Prette will continue to act as president, and will also be Senior Vice President (SVP) for human resources at parent company Thales Alenia Space, a position he has held since the 66 percent Thales, 33 percent Finmeccanica joint venture was established in 2005.

Amoroso, 56, will also be deputy to the president and CEO of Thales Alenia Space, Jean-Loïc Galle, with direct responsibility for the Observation, Exploration and Navigation (OEN) business line.

Prior to this appointment, Amoroso was with Alenia Aermacchi, a Finmeccanica Group company, as Chief Operating Officer (COO) and SVP for Boeing programs.

Before this he was general manager of the Caselle Torinese (Turin) plant, the headquarters of Alenia Aeronautica’s military aircraft business unit, which is now Alenia Aermacchi.