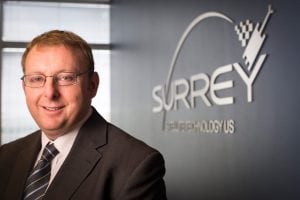 [Via Satellite 06-01-2015] Surrey Satellite Technology-US (SST-US), the United States-based subsidiary of Surrey Satellite Technology Limited (SSTL), anticipates increasing its headcount around eightfold by 2020 as the company grows its presence in the U.S. small satellite sector. Roughly two years ago, the company moved to its current headquarters in Englewood, Colo., equipped with a missions operations center, Assembly Integration and Test (AIT) cleanroom and labs. SST-US now has full satellite manufacturing and integration capabilities in the U.S., where the company hopes to tap into the high level of ongoing small satellite activity.

“We are still only around the 20 to 25 people level at the moment. I’m looking to grow that over the next five years trying to get the company up to about 200 people. There are a lot of capabilities that the U.K. has that we’re looking at bringing across here to the U.S. in terms of other subsystems and other equipment so that the U.S. entity becomes more self-standing and self-supporting,” John Paffett, CEO of SST-US, told Via Satellite.

Created in 2008, SST-US grew out of SSTL as a way for the company to continue to expand without becoming a large company. SSTL made the decision to set up an entity in the U.S. to focus on that one market while SSTL addressed the rest of the world. Paffett estimated that the vast majority of the world’s entrepreneurs come from the U.S., making the country a ripe market for small satellite products.

“Now we are seeing a huge growth in the level of interest from the commercial entrepreneur base for small satellite solutions for a range of different applications and services. Clearly there is a lot going on in Silicon Valley at the moment across the spectrum of small satellite solutions. That growth is certainly huge in the U.S. more so than it is in other parts of the world at the moment,” he said.

SST-US continues to amass resources in the country, transitioning capabilities over time from SSTL. Paffett said the company started subsystem manufacturing, working with Aeroflex in Colorado Springs, Colo., which has done a significant amount of the company’s electronic subassembly work for Global Positioning Satellite (GPS) receivers and Space Global Navigation Satellite System (GNSS) Receiver Remote Sensing Instruments (SGR-ReSI). But SST-US’ approach is measured, meted out based on the momentum of the business.

“The strategy we have at the moment is very much organic growth, so we’re building the company and growing the company off of the back of the contracts that we win. We are not making huge out-front investments with the hope that the work will then flow; we are growing it organically,” explained Paffett.

Some of SST-US’ most recent projects are the Orbital Test Bed (OTB) missions. Paffett said integration has begun on the first OTB, which will carry five experiments to trial in Low Earth Orbit (LEO). The OTB is scheduled to launch next year on a SpaceX Falcon Heavy rocket. SST-US is also working on a second mission, OTB 2, which will leverage a 150-kilogram platform like its predecessor to make room for potential customers. SST-US is currently in discussions with potential customers for the OTB-2 mission.

Today SST-US’ business is predominantly institutional customers such as NASA and NOAA, but Paffett said the goal is to eventually mirror SSTL in the U.K., which is approximately 80 percent commercial entrepreneurial, 15 percent institutional, and 5 percent defense. Part of the plan to address these customers includes working on advanced manufacturing techniques that SST-US believes will have a major impact on the small satellite sector today.

“Advanced manufacture, some of the progress that has been made on software defined radios and next generation propulsion systems — those are all key technologies that enable us to come up with smaller more efficient satellite platforms,” said Paffett.

Regarding the large proposed broadband constellations made of small satellites, Paffett said the situation today differs from that of previous projects that failed to materialize in the past. The main difference he pointed to is the type of Return on Investment (ROI) companies and investors are now looking for.

“Basically, before it was investment money going into the dotcom bubble. Now it’s almost the dotcom money going into another bubble. So you’ve got people, like Elon Musk, who are looking to invest in these systems for very different reasons; Google expressed some interest and went on to buy Skybox. The whole reason for investing in some of those areas is not quite as simple as a mere ROI for the investment money. They are not just putting their money in a short-term investment, they are looking at investing in these technologies to take their overall business cases forward or modify or adapt their business case,” Paffett said. “I think it’s inevitable that some of the systems will succeed and some will fail, but I’m not sure that we will see the same bubble-burst type effect that we saw in 1990s to 2000s.”