Intelsat to Bring EpicNG to New Markets with Kymeta Partnership

[Via Satellite 02-05-2015] In preparation for the launch of its first EpicNG High Throughput Satellite (HTS) toward the end of this year, Intelsat has signed a significant partnership with Kymeta, designer of an electronically steerable flat satellite antenna. Kymeta will introduce Ku-band “mTenna” satellite antenna solutions tailored to EpicNG, opening up markets that were previously not feasible for the operator.

“This will enable applications in mobility, Internet of Things (IoT) and Machine-to-Machine (M2M) where the form factor from parabolic dishes and the cost structure has made it impractical for [Geostationary Earth Orbit] GEO Ku band. We believe that Kymeta’s technology will open up applications in mobility, transportation, content delivery and wireless backhaul over the long term,” Jay Yass, VP of market development at Intelsat, told Via Satellite.

The first Intelsat EpicNG satellite, Intelsat 29e, is scheduled to launch near the end of 2015 aboard an Ariane 5 rocket. Yass said Intelsat expects Kymeta’s technology will simplify access not only to EpicNG, but to the company’s existing satellites as well. He added Intelsat sees the partnership as enabling new services worldwide.

“We have a global fabric that is comprised of the EpicNG high throughput satellites and wide beams that covers 99 percent of the Earth. Depending on what geography and what application, the Kymeta technology will work on both the wide beams and the spot beams,” said Yass.

For some verticals Kymeta will work exclusively with Intelsat on developing Ku-band technologies. Kymeta’s electromagnetic metamaterials-based mTenna products respond to RF energy in a way that allows for directional changes both continually and instantaneously, but without moving. The company has tested the technology on GEO satellites such as Telesat’s Anik F2, and on Medium Earth Orbiting (MEO) spacecraft with O3b Networks. Bill Marks, executive VP of strategic and business development at Kymeta, said the company anticipates having its first tests with Intelsat in a few months.

“We are hoping to have a development kit of this product available for them [Intelsat] to start testing near the end of 2015 and then commercially available probably trailing that by a year,” Marks told Via Satellite.

Together, Intelsat and Kymeta plan to create a variety of antenna and terminal products for both core application verticals as well as new markets. With M2M and IoT applications expected to see significant growth over the next 10 years, the companies are eager to tap into these lucrative emerging sectors, among others. 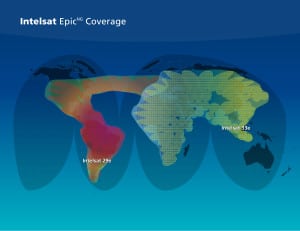 A coverage map for the first two Intelsat EpicNG satellites, IS 29e and IS 33e. Photo: Intelsat

“Kymeta’s flat-panel form factor and low cost has the potential to open business jets to satellite, reduce the cost of satellite backhaul, maritime and other traditional solutions” Andrew Spinola, senior analyst at Wells Fargo wrote in a research note, adding that Kymeta’s edge with the connected car could be the greatest new satellite opportunity. “In our research, competitors seemed skeptical that Kymeta or others could accomplish much improvement in antennas and that it would be many years before metamaterials technology would work outside of the lab. For this reason, we see Intelsat’s endorsement of the technology as a major endorsement for Kymeta and the possibility that Kymeta could realize its goals, which would ultimately be very positive for satellite.”

Kymeta originally intended to introduce a product next month at the SATELLITE 2015 Conference and Exhibition, but has pushed back that release following a discovery that further improved the performance of the technology. Previously the company focused on using a rectilinear design, but has now shifted to a cylindrical one.

“Over the last six months we discovered a new design architecture that makes the antenna work exponentially better than it did a year ago in talking about it,” explained Marks. “So we redesigned the antenna and it will perform better. That’s the design that we will eventually take to market.”

Kymeta has seen interest in its antennas from a multitude of different markets, ranging from established such as Direct-to-Home (DTH) television, to emerging such as the connected car. In December 2014 the company closed a $20 million financing round with investors such as Bill Gates and Lux Capital. Investors and satellite companies see great potential in Kymeta’s technology, and Yass expressed enthusiasm at Intelsat’s critical partnership.

“Try to envision a picture in your mind of putting antenna on top of bus or train that is going through a tunnel. That doesn’t work. [With Kymeta flat-panel antennas] that will be possible. Then there is ease of installation. Kymeta can ship antennas to areas where the technical prowess may not be great, but the beam-steering technology [of the antenna] finds the satellite. This is opening up applications that we can’t imagine or do today,” said Yass.