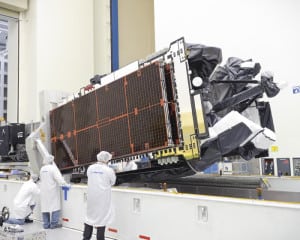 [Via Satellite 01-14-2015] MacDonald Dettwiler and Associates (MDA) has signed a contract with Boeing for components for a Boeing 702MP satellite for an unnamed customer. The company is providing a communication antenna subsystem through a contract valued at $5.2 million.

Boeing has received nine orders for Boeing 702MP satellites from Intelsat, with the first four orders issued in 2009, the next four in 2013 and one more in July 2014. Compatible with the Ariane, Proton Atlas, and Sea Launch rockets, Boeing 702MP satellites weigh between 5,800 kg and 6,160 kg at launch, and use a hybrid bi-propellant propulsion system once in orbit.