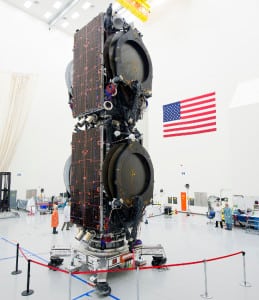 [Via Satellite 01-12-2015] Boeing has completed production of two all-electric propulsion satellites: the ABS 3A satellite for Asia Broadcast Satellite and the Eutelsat 115 West B satellite for Eutelsat. The Boeing 702SP (small platform) satellites have a lower price tag, significantly lower weight, and provide more options for movement to different orbital positions, according to the satellite manufacturer.

Boeing technology allows two all-electric satellites to be stacked and launched together. The ABS 3A and the Eutelsat 115 West B satellite are scheduled to launch on a SpaceX Falcon 9 rocket in February.

“We are the first aerospace company to develop this highly efficient and flexible all-electric satellite, and we completed the first two 702SPs less than three years after contract award,” said Mark Spiwak, president of Boeing Satellite Systems International. “With more than 210,000 hours of on-orbit experience with electric propulsion, we recognized that this highly efficient, lighter weight propulsion system would translate into cost savings for our customers.”