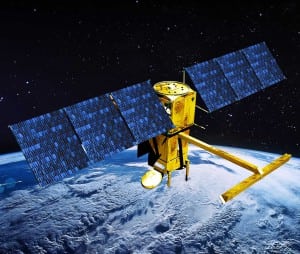 [Via Satellite 01-06-2014] The French Space Agency CNES has selected Thales Alenia Space to build the Surface Water and Ocean Topography (SWOT) satellite, a joint demonstration mission between CNES and NASA. Thales Alenia Space is creating a new platform for the satellite that enables a controlled atmospheric reentry at the end of the spacecraft’s life, in line with the French Space Operations Act.

The SWOT satellite will carry the Ka-band Radar Interferometer (KaRIn) which was built by NASA JPL with a Radio Frequency Unit (RFU) from Thales Alenia Space. KaRIn can observe a 120-kilometer swath with a horizontal resolution of 50-100 meters. The satellite’s second module carries the same instruments as its predecessor Jason satellites as well as a Doris system for precision orbital determination, an Advanced Microwave Radiometer (AMR), a GPS payload, and Laser Retro-reflector Array (LRA).

SWOT is compatible with Orbital Sciences’ Antares, SpaceX’s Falcon 9, and United Launch Alliance’s Atlas 5 launch vehicles, and is expected to orbit in 2020 for a three-year mission. The satellite will study both oceanography and hydrology to provide a better understanding of the water cycle. The Canadian Space Agency (CSA) and the U.K. Space Agency are also contributing to this mission.