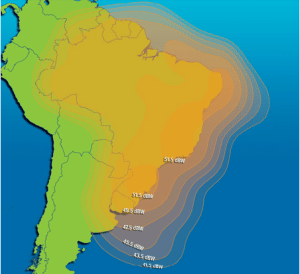 [Via Satellite 10-20-2014] Intelsat and Spanish satellite operator Hispasat have agreed to continue working together at the 55 degrees West orbital location over Latin America. Hispasat has collocated its Amazonas 1A satellite with Intelsat’s Galaxy 11 since June 2014. The company reports it has purchased capacity on the upcoming Intelsat 34 satellite, set to launch in the second half of 2015. Both companies are interested in collaborating at this location, which focuses heavily on Brazil, for DTH broadcasting.

“For Hispasat, this agreement is a clear example of efficient management of space resources, in terms of both orbital positions and satellites. This collaborative agreement allows each company to optimize the use of our respective assets and expand our business opportunities in an efficient manner,” said Carlos Espinós, CEO of Hispasat.