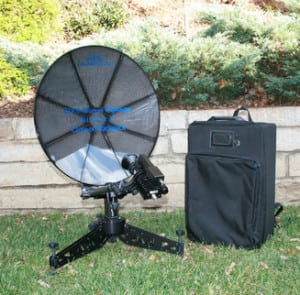 The lightweight and compact antenna can be assembled and operational in less than 5 minutes, packs into a small airline carry-on compliant backpack, and weighs less than 16 kg when packed, according to AvL. The antenna received approval with manual pointing, but has optional motorization. Other options include interchangeable X- and Ku-band feeds in addition to Ka-band (LP and CP) feeds.

“AvL Technologies’ new 60cm Manual FlyAway antenna is incredibly rigid for operation in Ka-band, and during testing performed well above expectation with data rates of more than 10 megabits up,” said Steve McGuinness, VP of international sales for AvL Technologies.